“We are thrilled to announce that Luke McNamara has committed to our program here in Saginaw,” said GM Drinkill. “Luke was a player we targeted this year, and were able to watch him live as he moved down to the United States to play. He is very dedicated and driven to be a professional. By him moving away to play this season, it shows how much he wanted to develop his skills ahead of the OHL Draft. Luke’s combination of skill, size, skating ability, and hockey intelligence quotient (IQ) make him a perfect fit for our playing style. We look forward to watching him play and welcome him to the Spirit family.”

The 6-foot-3, 170-pound center from Mississauga, Ontario was selected by the Spirit 15th overall in the 2021 OHL U16 Priority Selection. McNamara played for the Bishop Kearney Selects 15U during the 2020-21 season, scoring 20 goals and adding 25 assists for 45 points in 32 games.

‘’I was absolutely ecstatic to hear my name called by Saginaw,” stated McNamara. “It was an exciting day with lots of emotions for me and my family. We were stoked to be picked by such an amazing organization that suited us really well. Seeing a player like Cole Perfetti come in and make an impact at 16 years old is great motivation for me going into this season. I cannot wait to get started and play in front of the amazing fans at the Dow Event Center.’’

The McNamara family name is ingrained into the fabric of the hockey community.

Luke’s father, Tim, played USports hockey at University of Toronto, as well as York University and had a professional stint in Sweden in the early 1990’s. He also played Senior semi-professional hockey in Cambridge, Ontario.

Great uncle Gerry McNamara is a former goaltender and alumnus of the OHA (now OHL). Though McNamara enjoyed a 20-year playing career including seven NHL games, he is most known for his eight seasons as general manager of the Toronto Maple Leafs in the 1980’s. Following his tenure with the Maple Leafs, McNamara was a scout for the Stanley Cup Champion Calgary Flames in 1989.

All three of his uncles have played prominent roles in hockey with John and David McNamara working as NHL scouts, and Bob McNamara serving as the general manager of the Grand Rapids Griffins from 1996-2011. 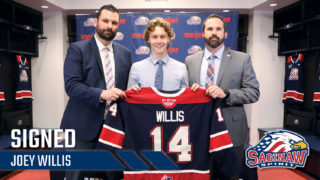