“We are very excited to be adding a player of Joey’s ability, but more importantly, the person that he is to our organization today,” said Drinkill in a press gathering Friday at The Dow Event Center. “We had him ranked as a first-round pick going into the 2021 Draft, so we selected McNamara in the first-round last year, in our mind, we are adding another first round pick tour lineup.

Willis, 17, played last season with Chicago Mission 16U scoring two goals and three assists for five points in seven games in the High Performance Hockey League 16U during 2021-22 season. Though he missed time with an injury, Willis is set to participate in the Saginaw Spirit’s Development Camp on May 19.

“I just want to thank everyone from the Saginaw Spirit organization for the opportunity,” said the Elmhurst, Illinois native, Willis. “I came here for the coaching and the people around the team are second to none.  It was really an easy choice to pick Saginaw (to further my hockey career). I’m just glad to be a part of this train because I know it’s going to get rolling soon.”

“He’s a competitor,” said Spirit Head Coach Chris Lazary. “He has a ton of speed.  Joey makes a lot of plays and has a high hockey IQ, great teammate, he is all the things that we look for in a player.”

Willis will wear No. 14 this season when the Spirit hit the ice come October 2022. 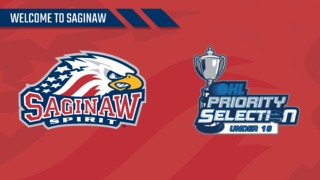