Spirit Take Down the Guelph Storm 8-3 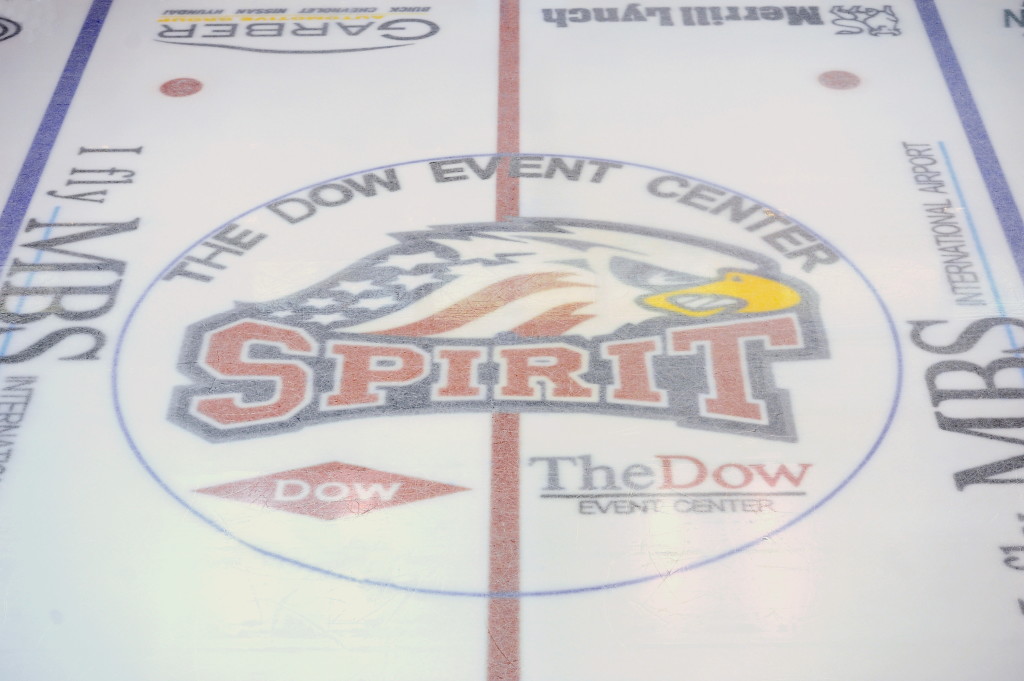 Spirit Take Down the Guelph Storm 8-3

Tonight at The Dow Event Center, loyal fans filled the stands for a sold out game!  The Spirit then dominated the Guelph Storm by a score of 8-3.  Scoring for Spirit was spread out amongst six players: Eric Locke, Brad Walch, Terry Trafford, Michael Fine, Josh Shalla and Nick Moutrey.

Spirit came out strong in the first period.  Brad Walch took a long shot, missed, but Eric Locke tapped it in for a goal of his own.  At the 9:52 mark, right-winger Justin Auger notched a goal of his own to tie the game 1-1.  Defensemen Daniel Poliziani and Ryan Horvat assisted Auger’s goal.  Augar’s goal would not be enough to stop the Spirit defense.  At the 12:42 mark, right-winger Terry Trafford took a shot and landed a goal to take the lead over the Storm.  Defensemen Brandon Archibald and center Justin Kea assisted Trafford’s goal.  Trafford’s goal would not be enough to stop the Storm.  Augar notched his second goal of the game with a wrist shot from the hashmarks to tie the game 2-2.  Tyler Bertuzzi and Horvat assisted Augar’s second goal.  Seconds later, right-winger, Zach Mitchell tapped in a goal of his own to make the Storm have their first lead of the game. Jason Dickinson and right-winger, Cody McNaughton assisted Mitchell’s goal.  The Storm would take the lead at the end of the first.

The second period would be an even battle amongst the two teams.  At the 15:39 mark, Brad Walch scored his first goal of the season on the power play.  Walch’s goal tied the game 3-3.  Brandon Saad and Josh Shalla assisted Walch’s first goal.  Moments later, right-winger Michael Fine finishes a rebound off of a shot by Saad and just like that the Spirit lead by one 4-3.  Locke and Saad assisted Fine’s goal.  Less than a minute later, Fine turns around and lands his second goal of the game, putting the Spirit in the lead by two goals!  Defenseman Brandon Archibald and Shalla assisted Fine’s goal.  The Spirit would hold their two-goal lead heading into the third period.

The third period started off to a fast start amongst both teams.  Shalla hung around the net and landed himself a shorthanded goal.  He now has full possession of second place on the Spirit career goals list.  Saad and Fine assisted Shalla’s goal.  At the 14:45 mark Shalla snipes his second goal from under the crossbar.  His goal lifts the Spirit score to 7-3.  Fine and Saad assisted Shalla’s goal.  At the 17:48 mark, right-winger Nick Moutrey scores a goal of his own to make the score 8-3 over the Storm!  Left-winger Vadim Khlopotov and defenseman Jamie Oleksiak assisted Moutrey’s goal.  Moutrey’s goal would seal the win over the Storm with a final score of 8-3.

Catch the Spirit!  The Saginaw Spirit return home next Saturday, January 14th 2012 to take on the London Knights.  Puck drops at 7:11pm at The Dow Event Center.  For all ticket information, please contact the Spirit at 989-497-7747 or visit the Official Saginaw Spirit Ticket and Merchandise Store at 5789 State Street in Saginaw.  Tickets can also be purchased at SaginawSpirit.com or any TicketMaster Outlet.