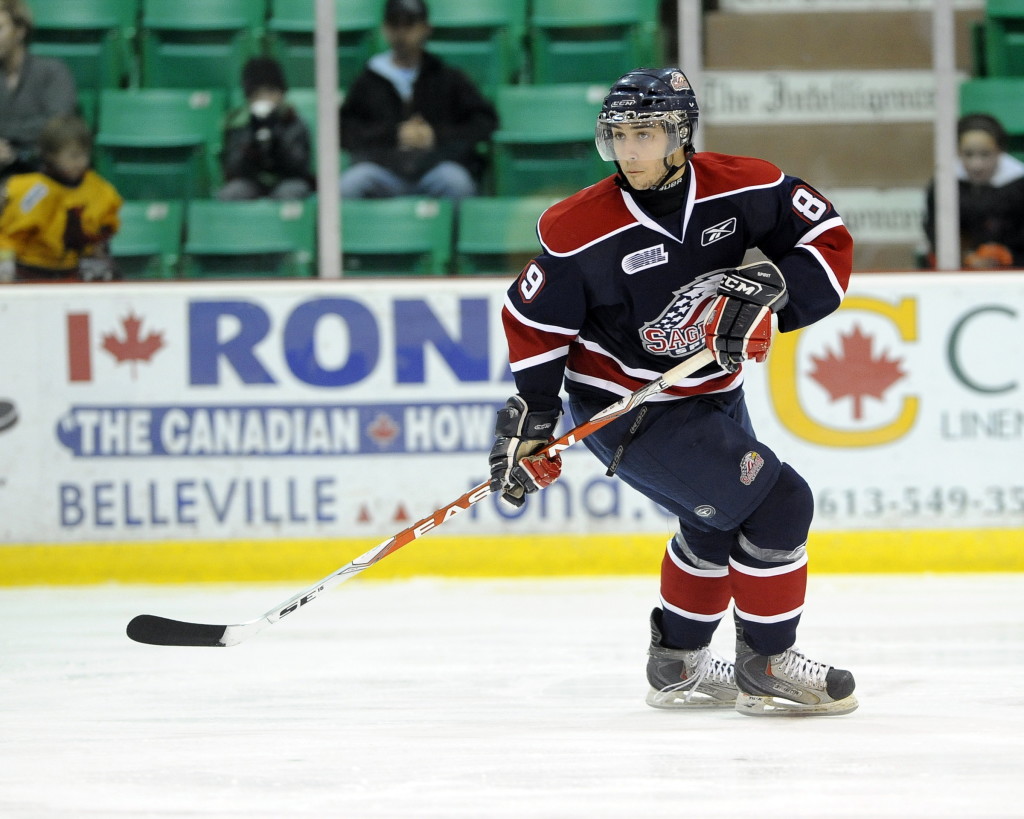 The Saginaw Spirit made the trip down to Windsor to take on the Spitfires on Thursday night and after falling behind 3-0 in the first period, came all the way back to defeat the Spitfires 5-4 in a shootout.  Scoring for the Spirit were Brandon Saad, Vince Trocheck, Eric Locke, and Michael Fine.  Clint Windsor made 36 saves in net for Saginaw.

The first period did not get started the way the Spirit wanted as just 33 seconds into the hockey game, Windsor’s Kerby Rychel scored to give the Spitfires an early 1-0 lead.  A little under five minutes later the Spitfires would put another goal past Clint Windsor, as Kerby Rychel would net his second goal of the game on the power play.  The Spitfires would continue to pour on the pressure in the first period, scoring a late goal at the 15:28 mark off the stick of Stephen Alonge.

Saginaw would answer back in the second period, scoring an early period goal of their own on the power play from the captain, Brandon Saad, assists going to Michael Fine and Josh Shalla.  Half way through the period Saginaw would strike again with their second power play goal of the period, this time from Vince Trocheck to pull within a goal.  Then, in the final two minutes of the second period, the former Spitfire, Eric Locke would score to tie the game at 3-3 as we headed into the second intermission.

The third period saw the Spirit striking first and taking their first lead of the hockey game.  A shot from the point by Steven Strong was redirected into the net off a tip from Michael Fine to put the Spirit up 4-3.  The Spitfires would get the goal back late in the period scoring at the 15:04 mark. Saverio Posa was the Spitfires goal scorer, tying the game once again at 4-4.

The game would be forced to overtime where Windsor would find themselves on the power play following an Eric Locke tripping penalty, but would not convert.  In the shootout Clint Windsor would stop the Spitfires final two shooters while Carlos Amestoy and Vince Trocheck scored for Saginaw, sealing the victory for the Spirit.

MCVI Shocks & Saves Game – On Saturday, January 28th at The Dow Event Center is the 5th Annual MCVI Shocks & Saves Healthy Heart Awareness game presented by Biotronik.  Local area doctors face off alongside former Detroit Red Wings in a charity game prior to the Saginaw Spirit taking on the London Knights at 7:11pm. For all ticket information, please contact the Spirit at 989-497-7747 or visit the Official Saginaw Spirit Ticket and Merchandise Store at 5789 State Street in Saginaw.  Tickets can also be purchased at SaginawSpirit.com or any TicketMaster Outlet.