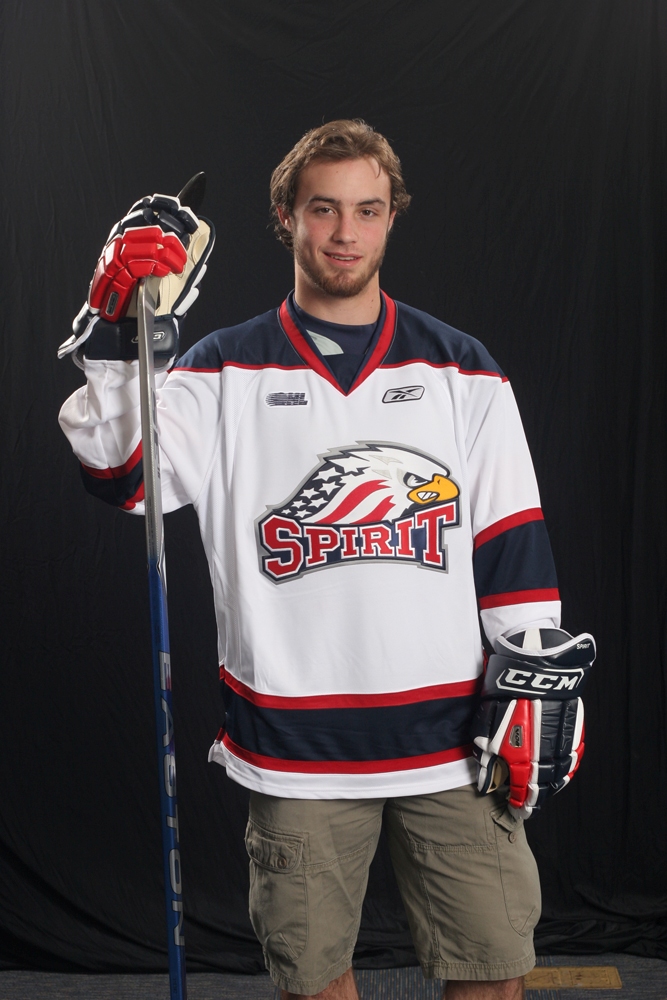 The Saginaw Spirit suffered a 3-2 regulation loss to the defending two-time CHL Memorial Cup Champions the Windsor Spitfires Saturday night at The Dow Event Center, marking the first time this season the Spirit have lost at home and have lost to an OHL West Division Rivial.  The Saginaw Spirit lead the OHL Western Conference with 28 points and a record of 13-3-1-1.

The night also marked a special salute to Military Veterans and to their families, and thanks to the support of Spirit fans and the efforts of the Guns and Hoses charity hockey game and it’s police and firefighter participants, the Spirit were able to raise over $3,000 for the Department of Veteran Affairs and the Aid to Needy Veterans Fund.

Following the Guns and Hoses game the Spirit and Spitfires hit the ice.  Windsor’s Tom Kuhnhackl opened scoring on a power play goal to give the Spitfires an early 1-0 lead 5:35 into the first period, courtesy assists from defenseman Ryan Ellis and center Alex Khokhlachev.  Spirit forward Brandon Saad answered with a power play goal 0:19 seconds into the second period from defenseman Ryan O’Connor and center Mathew Sisca; it was Saad’s tenth goal of the season.  The Spitfires regained the lead with Kuhnhackl scoring his second goal of the game at the 11:57 mark, with Khokhlachev and defenseman Saverio Posa notched the assists.  At the end of the second frame Windsor held a 2-1 lead.

The Spirit tied up the game at 4:35 into the third period with forward Michael Kantor notching a goal from wingers Anthony Camara and Garret Ross.  The contest was pushing overtime until Spitfires center Stephen Johnston clinched the game winning goal in the final seconds of the third period.  The goal came at the 19:48 mark with assists coming from center Ryan Ellis and winger Zack Ellis.

Get your tickets!  The Spirit will be on the road next weekend for a two game series and will return home November 18 for a contest against Brampton! For ticket information, please contact the Spirit at 989-497-7747 or visit the Official Saginaw Spirit Ticket and Merchandise Store at 5789 State Street in Saginaw.  Tickets can also be purchased at SaginawSpirit.com or any TicketMaster Outlet.