Saginaw Takes Game Three in Dramatic Fashion at The Dow 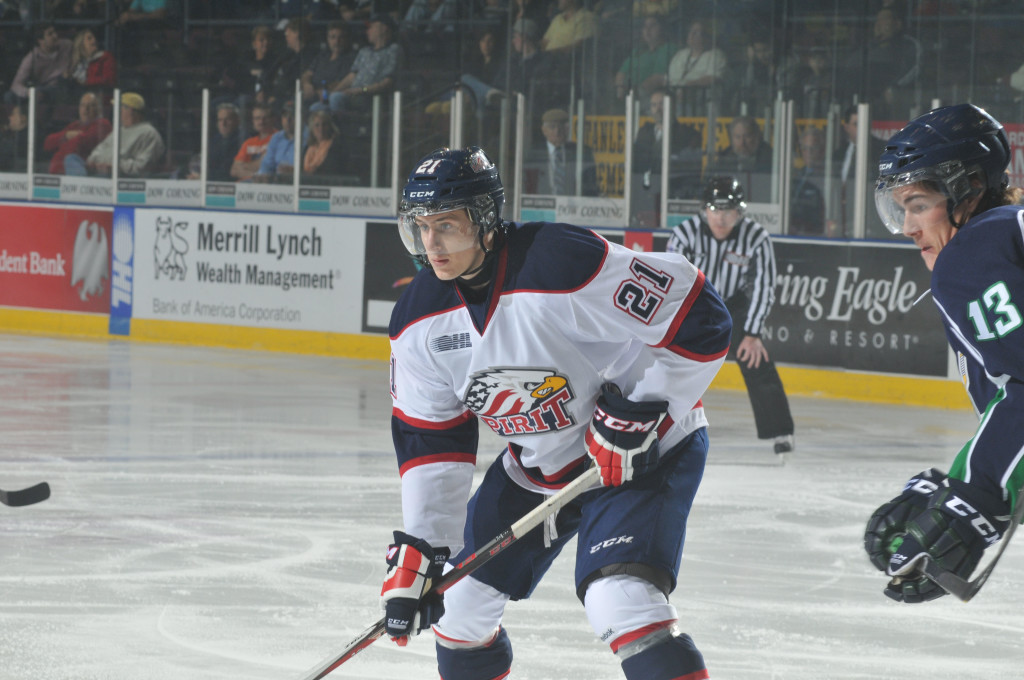 Saginaw Takes Game Three in Dramatic Fashion at The Dow

The Saginaw Spirit welcomed the Erie Otters to The Dow Event Center on Monday, March 24th for game three of their Western Conference best-of-seven playoff series.  In a must win game for the Spirit, they pulled out a 7-6 overtime nail biter, trimming the Otters’ series lead to 2-1.

The Spirit got things rolling right away when Eric Locke finished off a pretty passing play that was set up by Kristoff Kontos and Luke Cairns one minute into the game putting Saginaw up 1-0. One minute later, Erie’s Andre Burakovsky netted a backhander to tie to the game at one that was assisted by Dylan Strome. Five minutes into the first period led to a discombobulated rebound goal that was scored by Saginaw’s Dylan Sadowy and assisted by Nick Moutrey and Justin Kea to put the Spirit up 2-1.

The Otter’s Andre Burakovsky scored his second goal of the game to tie the game less than two minutes into the second period and was assisted by Dylan Strome and Michael Curtis. Three minutes into the second period gave way to Saginaw’s Dylan Sadowy scoring his second goal of the night that was set up by Nick Moutrey to go up 3-2. Less than thirty seconds later, Erie’s Spencer Abraham fired home an unassisted goal to tie the game, 3-3. Erie took their first lead of the game with thirteen minutes remaining in the second period when Brendan Gaunce scored an even-strength goal that was assisted by Dane Fox and Connor Brown making it a 4-3 game. The Otters made it a 5-3 game when Adam Pelech netted a goal that was set up by Dane Fox and Connor Brown with seven minutes remaining in the second period. Saginaw’s Jacob Ringuette fired home a wrister from the point that was assisted by Daniel De Sousa and Jimmy Lodge making it a 5-4 game with five minutes remaining in the period.

Saginaw tied the game at five with fourteen minutes left in the game when Jimmy Lodge scored a nifty backhand goal that was assisted by Cody Payne and Sean Callaghan. The Spirit regained the lead after Jimmy Lodge tipped a Justin Sefton shot that found the back of the net and was also assisted by Kristoff Kontos with five minutes remaining in the game to put Saginaw up 6-5 on Erie. Erie managed to tie the game at six with 32 seconds left in the game on a goal that was fired home by Brendan Gaunce assisted by Dane Fox and Connor McDavid, which is how regulation ended. Four minutes into overtime Cody Payne picked up a loose puck and fired home a wicked wrister for the game winner leading way to a 7-6 Spirit victory. Saginaw goaltender Jake Paterson was fabulous in net in the third period and overtime session stopping 25 of the 26 shots he faced.

Catch the playoff Spirit:  Saginaw returns to The Dow Event Center for game four against the Erie Otters in the best-of-seven on Wednesday, March 26th,which that is slated to begin at 7:11 p.m. with $1 beer from 5:30-7:00 p.m.  Game five is slated for Thursday, March 27th at The Dow Event Center, which will also begin at 7:11 p.m.  For Spirit playoff tickets, log on to saginawspirit.com.