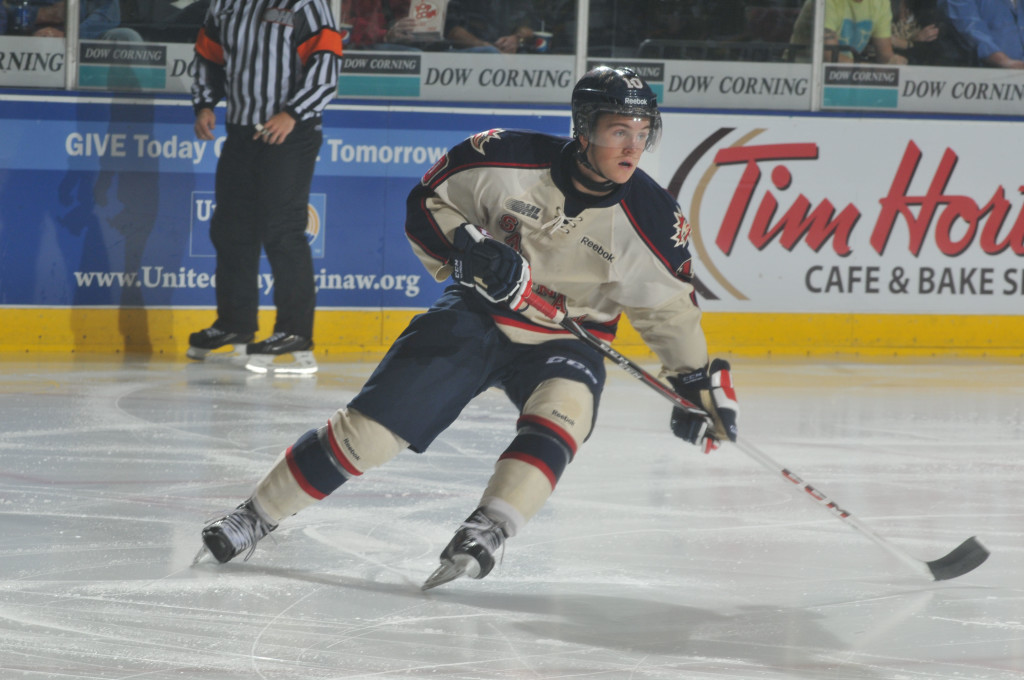 The Saginaw Spirit played host to the Erie Otters and entertained a home crowd at The Dow Event Center on Wednesday, March 26th to game four of the Western Conference playoff game.  A fast paced game gave way to a 7-3 Erie victory over Saginaw.

Saginaw’s Blake Clarke picked up a pass from Mitchell Stephens and sniped his first goal of the playoffs three minutes into the first period to put the Spirit up 1-0 on the Otters. Erie utilized the powerplay when Dane Fox netted a one-timer that was set up by Connor Brown and Connor McDavid with ten minutes remaining in the period. The Otters’ Dane Fox was at it again scoring his second goal of the night with five minutes remaining in the opening period that was was assisted by Connor Brown and Connor McDavid to put Erie up 2-1 on Saginaw. With two minutes left in the first period Erie benefited from a five-on-three man-advantage when Connor Brown scored a goal that was set up Dane Fox and Adam Pelech to make it a 3-1 game in favor of Erie.

Erie made it a 4-1 game five minutes into the second period when Andre Burakovsky fired home a goal that was assisted by Michael Curtis. Saginaw cut into Erie’s lead when Cody Payne finished off a powerplay goal that was set up by Jesse Graham and Kristoff Kontos with eight minutes left in the second period making it a 4-2 game.

Catch the Playoff Spirit:  The Spirit will be home at The Dow Event Center tomorrow, Thursday, March 27th for game five of the playoff series against the Erie Otters.  Game time is slated for 7:11 p.m., and for playoff tickets and everything Saginaw Spirit log on to saginawspirit.com.