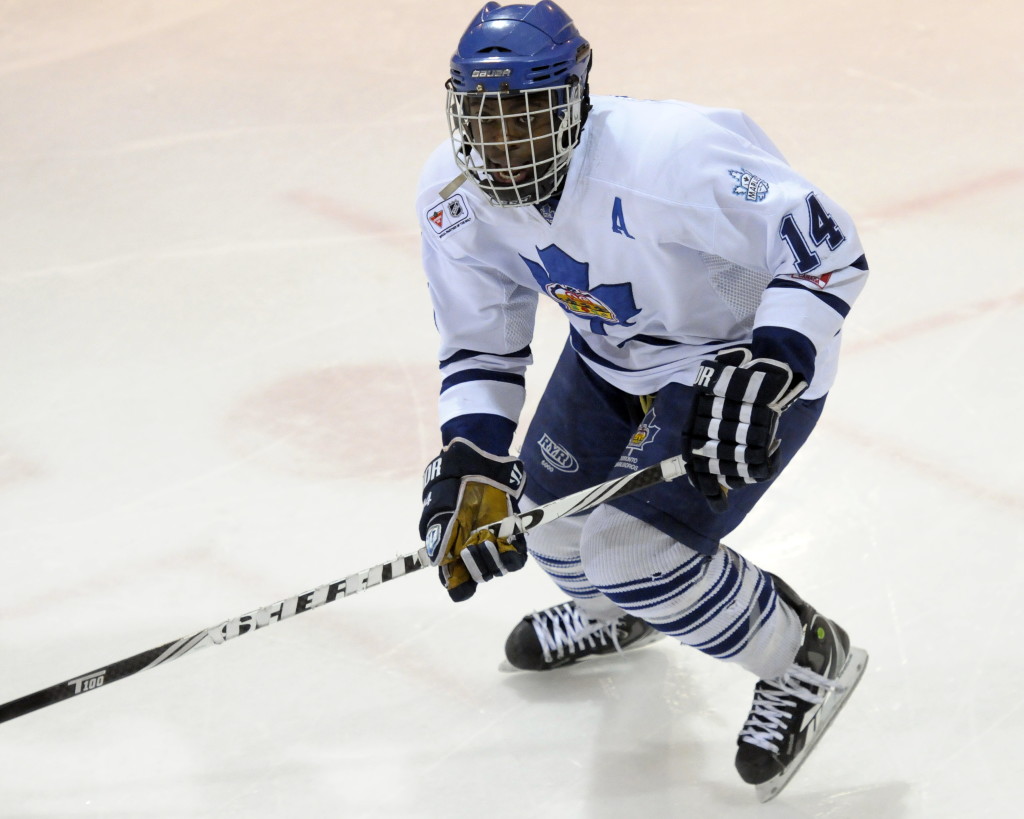 The OHL Priority Selection presented by State Farm goes this Saturday online at www.ontariohockeyleague.com. Here are five of the top minor midget prospects to watch this year.

Subban is an offensive minded defenseman who plays a real high risk/ high reward style of play. He likes to be very active and involved offensively. His game is all about the puck: moving the puck, carrying the puck, and creating offensive chances. He is a very good skater, displaying speed and mobility and has the quickness to cover a lot of territory in his own zone. He also possesses escapability meaning he creates time and space with his feet, allowing his teammates to get into a sound support position. His older brother P.K. graduated from the Belleville Bulls and now plays for the Montreal Canadiens while Malcolm is currently a goaltender with the Bulls.

Kujawinski is an offensive-minded forward that possesses natural ability and physical tools. He possesses size, a very good stick and he can skate. Once he is up to full stride he displays some speed and almost deceptive quickness . He uses his speed and quickness to stay on the play, and he always seems to be around the puck. He handles the puck with a ton of confidence, and he loves to attack on the rush. Once he crosses the blue line he becomes a very different and dangerous player with a pro-like shot. He has the potential to develop into a very good offensive player at the OHL level.

Bigras is a big-bodied, two way defenseman who shows some offensive upside. He has a good collection of physical tools and displays some speed and quickness. He is his most effective when he is moving north and south and competes at a high level. He uses his long reach to take away time and space, and close on puck carriers when they are attacking wide with speed. He likes to play a very active and involved game, always being a part of the play and has the potential to develop into a very effective two way defenseman at the next level.

Horvat is a highly skilled offensive minded center that competes at a high level, especially on the puck. He is relentless when he is pursuing the puck and on the offensive attack and shows flashes of quickness when he needs it, especially when he is playing on the puck. Horvat carries the puck with a ton of composure and he shows the ability to make plays and create offensively. When he has possession he can almost be a little slippery, and tough to defend against in one-on-one situations. Overall, Horvat has the potential to be a very productive offensive player at the OHL level.

Comper is a reliable two-way center that plays an extremely smart game and is rarely caught out of position. He displays above average speed and is good in his own zone both on and away from the puck. Comper isnt overly physical, but he competes consistently and wins a good percentage of his battles by putting himself in good body position and a quick stick. He is good on draws, winning a high percentage cleanly and is very dangerous in the offensive zone. He has the competitiveness, skill, and hockey sense to a top six forward.