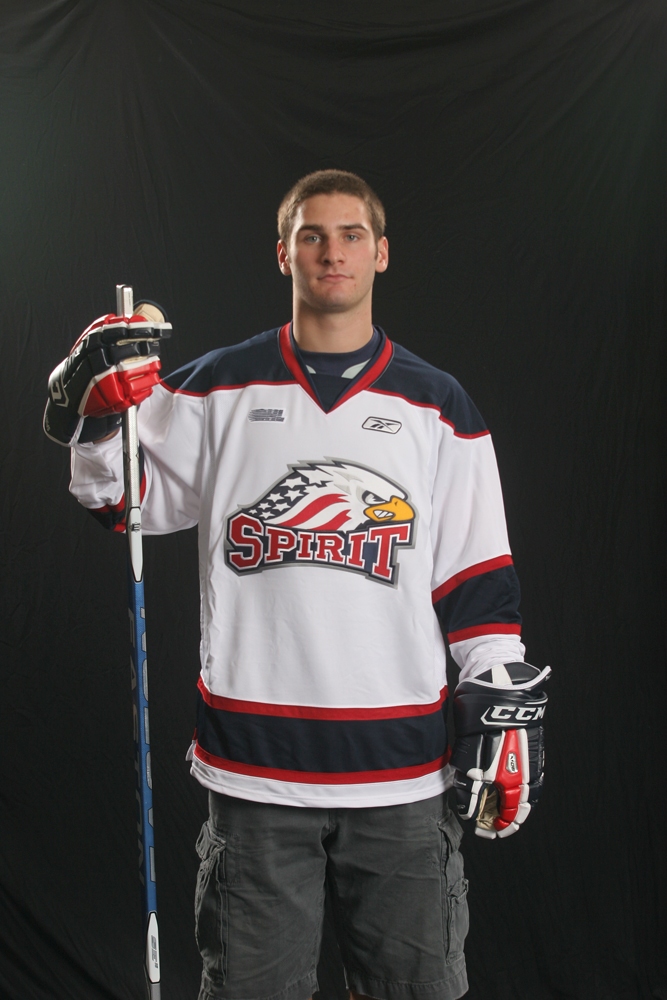 The Saginaw Spirit beat the Brampton Battalion by a score of 7-3 Thursday night at The Dow Event Center, completing a two game season sweep against the OHL Eastern Conference squad.  Brandon Saad bolstered the Spirit scoring in the contest, with his first OHL career hat trick in the effort garnering him the game’s first star honors.  The Spirit lead the OHL Western Conference with 34 points and a record of 16-4-1-1, and continue the weekend with an away game in Sarnia Friday night and a home game against the London Knights Saturday night.

The Spirit got off to a hot start with two consecutive goals in the first period.  Winger Brandon Saad notched a power play goal at 7:12 in the first from center Vincent Trocheck and defenseman Ryan O’Connor.  Spirit blueliner Peter Hermenegildo scored his first goal of the season at the 9:04 mark to advance Saginaw’s lead to 2-0, with Trocheck and center Ivan Telegin tallying the assists.   The Battalion would respond in the final minutes of the period, with winger Barclay Goodrow clinching an unassisted goal at the 16:31 mark to reduce the deficit to 2-1.

The second period was a mirror image of the first with the Spirit scoring two and the Battalion one.  Spirit center Michael Sgarbossa tallied a power play marker at 13:12 from defenseman Brad Walch and winger Josh Shalla to make it 3-1 Spirit and moments later winger Jordan Szwarz scored a goal at 17:47 courtesy assists from Walch and center Mather Sisca. Brampton winger Sean Jones would answer less than a minute after Szwarz’s goal, wrapping up the second frame with a tally at 18:31 from defensemen defensemen Kyle Pereira and Cameron Wind.  The second period ended with the Spirit up 4-2.

The Battalion carried their momentum into the third period, moving the score to within one goal after winger Ian Watters scored a power play marker at 2:24 from defenseman Spencer Abraham and Auld.  The Spirit would clamp down and secure the win with three straight goals.

Saad notched a goal at 5:32 courtesy assists Trocheck and O’Connor and minutes later Telegin scored on the power play at 7:42 from Shalla and Sgarbossa to give Saginaw a three goal advantage.  Saad would round out scoring and secure his first career hat trick at 12:34 in the third with an unassisted short handed goal.

Get your tickets!  The Spirit host the London Knights on Saturday, November 20 at 7:11 PM for the annual Girls Rock Ladies Night.  Pre-game activities start at 5:30 PM in the Blue Line Club.  For ticket information, please contact the Spirit at 989-497-7747 or visit the Official Saginaw Spirit Ticket and Merchandise Store at 5789 State Street in Saginaw.  Tickets can also be purchased at SaginawSpirit.com or any TicketMaster Outlet.