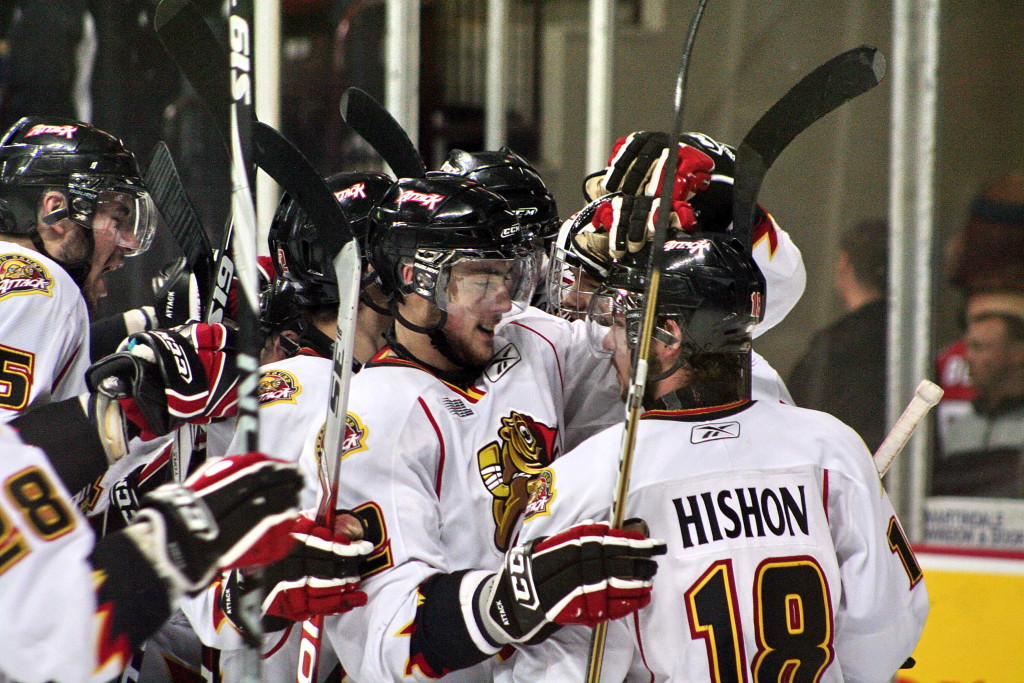 In Windsor, Roman Berdnikov scored the winning goal midway through the third period to help the Owen Sound Attack to a 3-2 win over the Spitfires in one of two Rogers Conference Championship Series games on Monday.

The two-time defending OHL and Memorial Cup champion Spitfires trail the Rogers Western Conference Championship Series 3-1 and could see their title defence end in Game 5 in Owen Sound on Wednesday.

Robby Mignardi opened the scoring for the Attack with a powerplay goal in the first period and former Spitfire Garrett Wilson scored the go-ahead goal early in the third.

Scott Stajcer made 25 saves in the win.

“I think my team played very well in front of me,” said Stajcer, who was named third star of the game. “The defence kept the shots to the outside. They were working really hard and doing a great job for me.”

Tom Kuhnhackl responded for the Spitfires with a powerplay goal late in the opening period and then brought the Spitfires to within one goal with another extra man marker with 2:37 left in the game.

Jack Campbell was the first star after making 40 saves for the Spitfires and holding them in for their late rally.

“I thought Owen Sound carried the play tonight,” said Spitfires coach Bob Jones. “Jack had an outstanding game and kept us in it. It probably shouldn’t have been as close a score as it was. We had a chance at the end and just didn’t capitalize.”

In St. Catharines, Joseph Cramarossa and Devante Smith-Pelly each scored a pair of goals to pace the Mississauga St.Michael’s Majors to a 6-1 win over the Niagara IceDogs.

The Majors lead the series 3-1 and can wrap it up to earn a berth in the Rogers OHL Championship Series with a win on home ice on Tuesday.

Cramarossa opened the scoring a little under six minutes into the game and added a short-handed insurance goal early in the second period. Riley Brace and Jamie Wise also scored while Justin Shugg and Derek Schoenmakers both chipped in with two assists.

“We play everybody and we expect everybody to contribute,” Majors’ GM/coach Dave Cameron said. “Joe had two big goals tonight. I think that was a real solid road win.”

JP Anderson stopped all but one of the 32 shots he faced while Mark Visentin surrendered five goals on 27 shots before being replaced by Dalton McGrath for the third period.

Johnson Andrews scored for the IceDogs in the first period.

“We said from Day 1 that this was a team that challenges you to play 60 minutes,” said IceDogs coach Marty Williamson. “In the first 40 we played 30 and they’re masters at capitalizing when teams are a little disfunctional.”