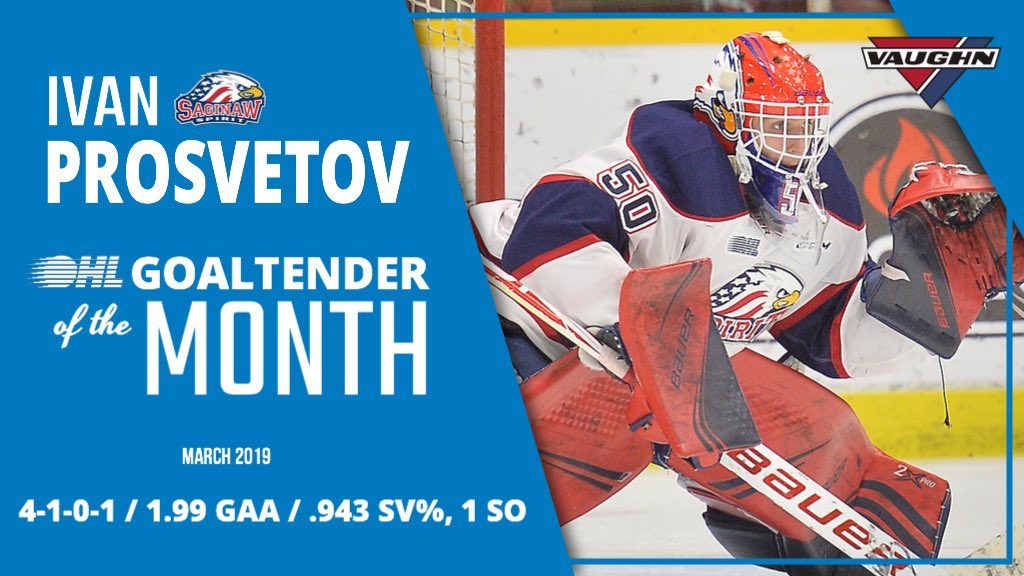 Vaughn OHL Goaltender of the Month – Ivan Prosvetov (Saginaw Spirit)
Arizona Coyotes prospect Ivan Prosvetov is the Vaughn OHL Goaltender of the Month for March, backstopping his team to a West Division title. Prosvetov played to a 4-1-0-1 record with a 1.99 goals-against average, .943 save percentage and one shutout over six games, turning aside 197 shots in the process. He started the month with four consecutive wins as part of a larger eight-game trend,  posting his fourth shutout of the season with a 27-save effort against the Peterborough Petes on Mar. 3rd. He earned second star honours, turning aside 47 of 48 shots in a 4-1 road win over the London Knights on Mar. 9th. Prosvetov turned aside 29 shots on Mar. 12th in Sarnia to backstop the Spirit to a franchise record 46th win and a club mark nine consecutive victories. He stopped 25 shots two nights later on Mar. 14th as the Spirit fell 2-1 in overtime to the Soo Greyhounds but locked down their first West Division title since 2011.

A 20-year-old native of Moscow, Russia, Prosvetov played to an overall mark of 36-11-2-1 with a 2.94 goals-against average, .910 save percentage and four shutouts in his first OHL season. The 6-foot-5, 185Ib netminder owns a league-leading .924 save percentage since Jan. 1st, playing to a 19-5-1-1 mark in that span. Chosen with the 13th overall pick of the 2018 CHL Import Draft, Prosvetov was a fourth round (114th overall) pick of the Arizona Coyotes last summer.