Top NHL prospects Perfetti, Byfield square off Saturday with the eyes of the hockey world on Saginaw 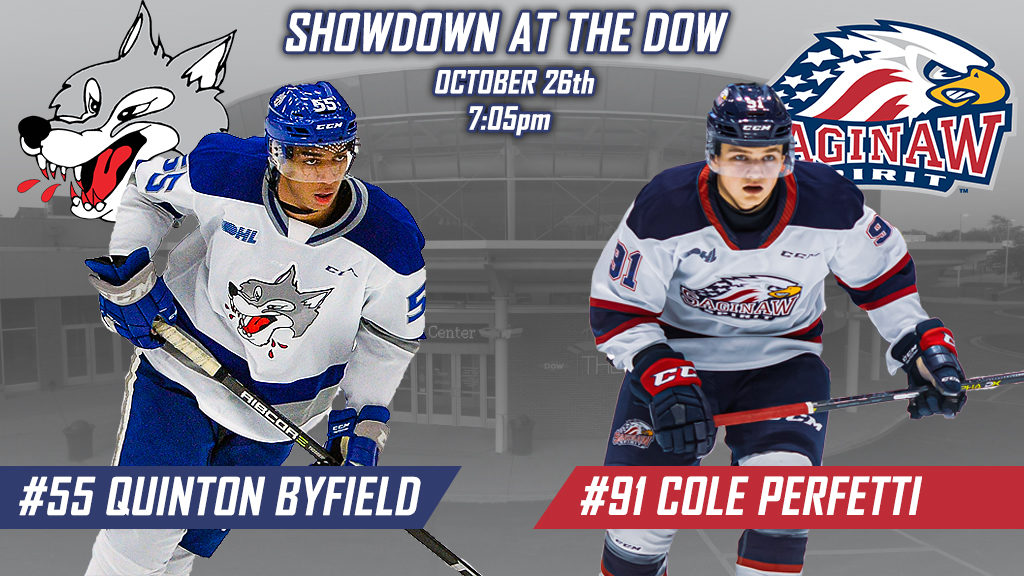 Two of the best hockey players in their age group in the world will take the ice Saturday night in Saginaw, when Cole Perfetti of the Saginaw Spirit host Quinton Byfield of the Sudbury Wolves for Pink Out Night presented Ascension St. Mary’s at The Dow Event Center. The puck drops at 7:05 p.m.

Coming off of a Spirit rookie single-season scoring record of 34 goals and 34 assists, Perfetti led the entire OHL in scoring among rookies with 74 points. The closest 16-year old was, you guessed it, Quinton Byfield, with 61 points. Despite Perfetti outscoring Byfield by 13 points, it was Byfield who was crowned the Rookie of the Year in both the Ontario Hockey League, and the entire Canadian Hockey League.

Byfield was the number one overall pick in the 2018 Priority Selection out of the York Simcoe Express program, while Perfetti, who was originally committed to play NCAA Hockey for the University of Michigan, was selected fifth overall to the Saginaw Spirit from the Vaughan Kings program.

This past summer, Perfetti and Byfield starred at the Hlinka Gretzky Cup, where Canada took a Silver Medal. Perfetti led the entire tournament with eight goals and four assists in five games, including a game where he scored two goals in regulation and three consecutive goals in the shootout to beat Sweden, 3-2. Byfield was third in team scoring with three goals and two assists in the five games.

NHL Central Scouting ranks both Perfetti and Byfield as ‘A’ prospects, projected to be first round picks in the 2020 NHL Draft in Montreal, QC. Most Hockey pundits have labeled Perfetti and Byfield to be the highest picks to come out of the Ontario Hockey League this year.

Sam Cosentino, lead Draft Analyst for Sportnet, was the latest to reveal his top 10 rankings for the 2020 NHL Draft, where Cole Perfetti was ranked second and Quinton Byfield was ranked third.

“The guy who has made a big rise is Cole Perfetti of the Saginaw Spirit. Here’s a guy who put up 37 goals as a 16-year old last season in Saginaw, he backed that up with eight goals in the playoffs in 16 games, and if you didn’t know about him at that point, you surely did when he represented Canada at the Hlinka Gretzky. He put up eight goals there and 12 points. He really made his mark on breakaways and escaping the defense.”

“Cole has extremely high hockey IQ, allowing him to find open ice and beat defenders, which gives him endless opportunities.”

Of Byfield, Cosentino said: “Having a big body down the middle of the ice is essential in the NHL game. Byfield comes in at 6-foot-4, 214 pounds and was nearly a point per game player last year.”

Button had this to say of Byfield: “Byfield is a terrific athlete with similarities in his game to Evgeni Malkin. He has perhaps the greatest upside (of anyone) in the draft.”

Button identified Perfetti as “This year’s sniper” ahead of the 2020 NHL Draft.

McKenzie said of Byfield: “The Sudbury Wolves’ centre is 6-foot-4 and 215 pounds so we’re talking Eric Lindros-like physical dimensions, although Byfield’s game is nothing like Lindros’ intimidating physical domination and punishment.”

“Byfield uses his size, strength and excellent mobility for a big man to create offence for himself and stake out territory in the front of the net and down low. Byfield can make plays and score goals, but scouts will be watching him to see if his finer offensive skills – vision, hands, and creativity – are on the same level as the other top offensive prospects.”

“He could well project as a big, point-producing No. 1 NHL centre, but even if he doesn’t turn out to be quite as prolific as some expect he would be no worse than a physically-imposing No. 2.

Five of 10 scouts surveyed by TSN have Byfield at No. 2; the other five ranked him between 3 and 6.”

McKenzie on Perfetti: “In Saginaw, the 5-foot-10 Perfetti has played both centre and wing, but NHL scouts seem to think the gifted goal-scorer is destined for wing in the NHL. Perfetti’s creativity is off the charts. Scouts say he doesn’t have blinding speed but he doesn’t necessarily need it because he seems to put himself in the right position to create offence. He may well be the most natural goal-scorer in the entire draft. He rocketed to prominence in the summer in the Ivan Hlinka tourney semi-final, when he scored twice in regulation and then followed it with Jonathan Toews-like shootout pyrotechnics in a clutch performance for the ages. Perfetti is a gifted playmaker, too, but putting the puck in the net is his calling card.”

It didn’t take long for the Saginaw Spirit Scouting Staff, led by fifth-year General Manager Dave Drinkill, to notice the elite skills that Perfetti brings to the table.

“Cole was a player that myself and our scouting staff got to see play a ton as he played a year up before his draft year with the 2001 age group in Whitby before moving to Vaughan in the GTHL. As an under-ager in minor midget, he was a special player that carried onto his draft year where he led the Vaughan Kings team within a win of the OHL Cup. His brain, hockey IQ, and how he sees the game is special and I haven’t had a player on the teams I have been with in my time in the OHL think the game the way he does. He is an elite talent and a fun player to watch, as at any point he can pull you out of your seat and change the game, he is a true difference maker”

As a General Manager and a fan of the game, Drinkill is also excited for Saturday night’s matchup at The Dow.

“It will be fun to watch Perfetti and Byfield go head to head. These two players are not only the two top draft eligible players from our league, but also two of the top overall players in our league as well despite of their age. They are very different hockey players but certainly dynamic and elite in their own way, and I know both will be ready for this match-up Saturday night. It will be the only time during the season Sudbury will be in Saginaw so it is a special night to watch our teams battle each other for two points.”

No matter if you’re a Spirit fan, a Wolves fan, or a fan of any other team; this is a marquee matchup that all in the hockey world will have their eyes on. This is what junior hockey is all about.

Tickets are on sale for Saturday night’s game at www.saginawspirit.com, The Saginaw Spirit Store on State St., The Dow Event Center Box Office, and ticketmaster.com