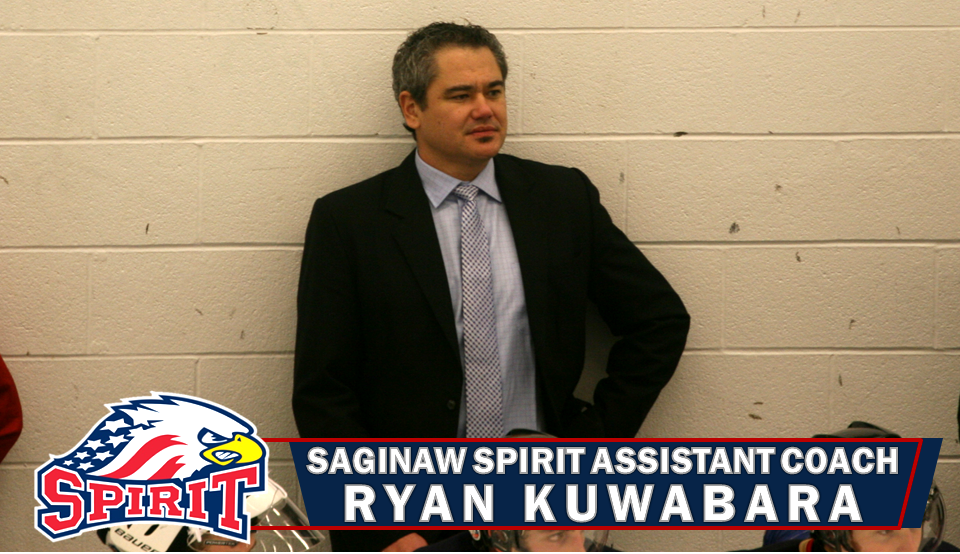 SAGINAW, Mich. – The Saginaw Spirit rounded out their 2017-18 coaching staff by announcing Friday the team has hired Ryan Kuwabara as Assistant Coach.

“I am extremely excited to welcome Ryan to the Spirit organization,” said Spirit Head Coach Troy Smith. “Having observed him develop young players with Ancaster into OHL players and NHL draft picks, I am confident he will be a great asset to our coaching staff. His experience in hockey is unique and impressive. We are extremely fortunate to add a staff member who is an Olympian, NHL draft pick, first round OHL pick, and a Bobby Smith Award Winner. His personality and experience will provide great mentorship to our players.”

Kuwabara (COO-wuh-BAR-uh), 45, comes to the Spirit from the Ancaster Avalanche Jr. B, where he spent the last four seasons as their Head Coach. Kuwabara is an OHL graduate, playing with the Ottawa 67’s from 1989-1992. The 67’s first round pick in 1989 was the recipient of the Bobby Smith Trophy for OHL Scholastic Player of the Year during the 1989-90 season. The Montreal Canadiens selected Kuwabara in the second round, 39th overall, in the 1990 NHL Draft later that summer. The 6’0 right winger scored 240 points in just 196 OHL games, all with the 67’s.

After two seasons in the Montreal Canadiens organization, Kuwabara traveled to Japan, where he would play 14 years of his 18-year pro hockey career. In 1998, Kuwabara was awarded the opportunity to play for Japan in the XVIII Winter Olympics in Nagano, Japan. Kuwabara’s two goals in the tournament helped Japan to their first Olympic Ice Hockey win since the 1976 games on February 12, 1998, a 4-3 shootout win over Austria in the consolation round. Kuwabara would also appear in four Men’s Ice Hockey World Championships as a member of the Japanese National Team.

“I am extremely excited to join the Saginaw Spirit organization,” said the incoming Assistant, Ryan Kuwabara. “I look forward to working closely with Troy Smith and Chris Lazary, as both gentlemen are phenomenal coaches. I hope to draw on my experience as an OHL player as a tool to guide our players to success on and off the ice.”

Kuwabara’s hire is based on the approval of immigration paperwork.

In addition to the hiring of Ryan Kuwabara, Spirit General Manager Dave Drinkill also announced the promotion of Brian Prout to the new position, Assistant to the General Manager.

Prout is the longest-serving member on the Spirit staff, being an original front office member of the team in 2002. His service to the team spans over 11 years in many different roles. He began in 2002 as an account executive until 2005. He returned in 2007 and the Vice President of Sales and Marketing. After two years with his native Sarnia Sting, Prout returned to the Spirit in 2012 as Vice President of Sales and Marketing, once again. In 2015, he ventured on to the Hockey Operations side of the business as a Volunteer U.S. Scout and will now continue his work directly under General Manager Dave Drinkill.

“Brian Prout is an extremely hard working individual that is passionate about the Saginaw Spirit organization and the direction we are headed,” said Drinkill. “I am looking forward to continuing to work alongside him for years to come.”

The Spirit open the 2017-18 regular season on Thursday, September 21st against the defending MasterCard Memorial Cup Champion Windsor Spitfires and host the London Knights for their home opener at The Dow Event Center on Saturday, September 23rd. Single-game tickets for the 2017-18 season go on sale August 21st.