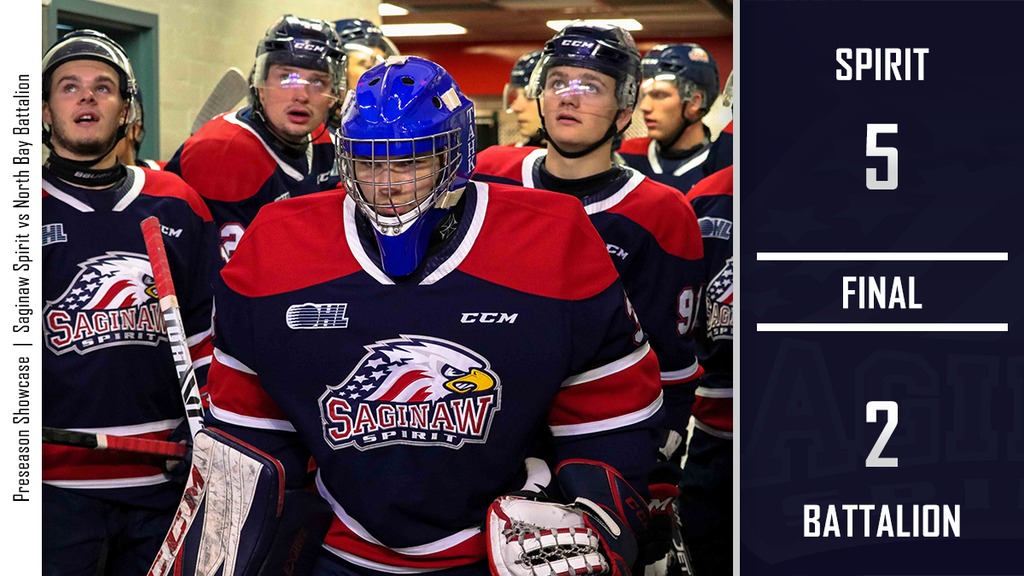 KITCHENER, ON – The Saginaw Spirit finished the three-game Preseason Showcase Sunday with a 5-2 victory against the North Bay Battalion at the Kitchener Memorial Auditorium in Kitchener, Ontario.

Saginaw entered the final game of the Showcase with a 1-1 record after dropping an 8-5 decision Friday to Peterborough, but responding with a strong 7-2 performance Saturday night against the Kitchener Rangers.

2017 14th round pick Carter Tahk got the start in goal and was tested early on some point-blank opportunities by the Battalion. An early D.J. King penalty gave North Bay the chance to open the scoring, but Saginaw’s penalty kill held the Battalion off the scoreboard. Goaltenders Tahk and North Bay’s Christian Cicigoi stole the show in the opening period. Cicigoi’s first period stops were highlighted by a post-to-post stop on Spirit veteran D.J. Busdeker alone at the side of the net. The Spirit outshot North Bay 14-12 in a scoreless first period.

The Spirit continued their pressure on Battalion netminder Christian Cicigoi, who made numerous dazzling stops throughout the second period. Finally, Mitchell Smith entered the Battalion zone with speed and dropped the puck back to a wide open Jake Goldowski. The Thornhurst, PA native made no mistake with a shot low, over the right pad of Cicigoi. The Spirit were awarded a five-on-three advantage late in the period, and overage forward Brady Gilmour found the back of the net with a shot to the short side, high on Cicigoi. The Spirit peppered 20 shots on goal in the middle frame and took a two-goal lead to the third period.

Just 34 seconds into the final period, Brady Gilmour scored his second goal of the game, this time on a low shot between the legs of Cicigoi. Cole Perfetti and D.J. King registered assists on Gilmour’s goal. Jake Goldowski padded the Spirit lead to four with his second goal of the game at 6:01. Just 43 seconds later, Mason Millman finished off a three-on-one break with a shorthanded goal. Cole Perfetti and Brady Gilmour picked up assists on the Philadelphia Flyers prospect’s first goal of the preseason. Spirit goaltender Carter Tahk finally yielded to the Battalion at 13:03, when a failed clearing attempt resulted in a Mason Primeau goal at 13:03. The Battalion’s Mitchell Russell scored an unassisted goal at 14:56 to bring the Battalion within three goals, but that is as close as they would get. Carter Tahk secured the win in goal, stopping 29 of 31 shots by North Bay. The Spirit fired 42 shots at Christian Cicigoi when all was said and done this afternoon. The Spirit improve to 2-1 this season in the preseason, and have won seven of their last eight preseason games overall.