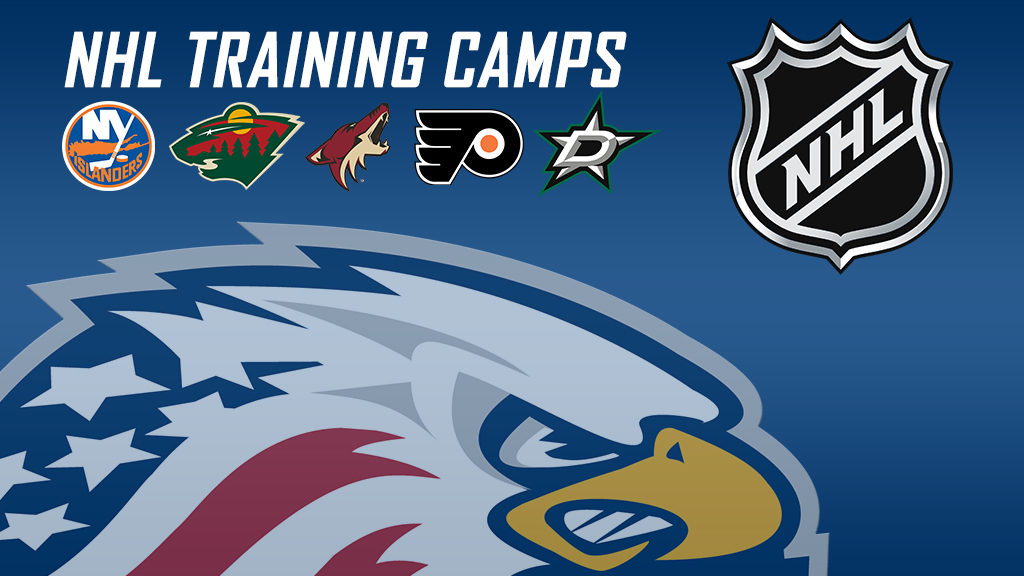 Prosvetov, 20, enters his second season after the Spirit made him their first overall pick in the 2018 CHL Import Draft (13th overall). The Arizona Coyotes selected Prosvetov in the fourth round, 114th overall, in the 2018 NHL Draft. The native of Moscow, Russia will skate in his second main camp with the Coyotes organization. The Coyotes signed Prosvetov to a three-year, entry-level contract on July 1, 2019.

OFFICIAL: Rookie Camp will begin on September 5 at @GilaRiverArena.

Coskey, 20, enters his fifth year in the Ontario Hockey League, all with the Saginaw Spirit. The Spirit selected Coskey in the third round, 47th overall, in the 2015 OHL Priority Selection. After not being selected in his first year of NHL Draft eligibility, Coskey was taken by the New York Islanders in the seventh round, 209th overall, in the 2019 NHL Draft. Coskey’s career-high 63 points last season finished fourth on the 2018-19 roster, while hitting the 30-goal plateau for the first time in his junior career.

Wilde, 19, enters his second season with the hockey club in 2019-20. Wilde was selected by the Spirit in the second round, 35th overall, in the 2016 OHL Priority Selection Draft. Wilde was selected by the New York Islanders in the second round, 41st overall in the 2018 NHL Draft. He committed to the Spirit in September of 2018, and went on the lead all Spirit defenseman in scoring. His 70 points were the most by a Spirit defenseman since Patrick McNeill’s record-setting 77-point season in 2005-06. Wilde finished third in voting for last season’s OHL Defenseman of the Year.

Jenkins, 19, is embarking on his third season with the Saginaw Spirit in 2019-20 after being selected in the first round, fourth overall, in the 2016 OHL Priority Selection.  The Jackson, Michigan native put career-highs in goals (23), assists (36), and points (59) in the 2018-19 season. Jenkins was selected by the Islanders in the fifth round, 134th overall, in the 2018 NHL Draft. This will be his second main camp on Long Island.

Spirit fans won’t have to go too far to see Dallas Stars prospect Nicholas Porco and Minnesota Wild prospect Damien Giroux in action, as both the Stars and the Wild are participating in this year’s NHL Prospect Tournament in Traverse City, Michigan from Sept. 6-10 at Centre Ice Arena.

Porco, 18, enters his third year with the Spirit in 2019-20 after the Spirit made Porco their number one pick in the 2017 Under-17 Priority Selection. The Sault Ste. Marie, Ontario native was selected by the Dallas Stars in the fifth round, 142nd overall, in the 2019 NHL Draft. This is Porco’s first main camp with the Stars.

Giroux, 19, enters his fourth season with the Spirit after he was a 2016 third round pick of the hockey club. The Hanmer, Ontario native reached the 30-goal and 50-point mark for the first time in his OHL career during the 2018-19 regular season. Giroux was selected by the Wild in the fifth round, 155th overall, in the 2018 NHL Draft.

#mnwild heading to the 2019 Prospect Tournament in Traverse City → https://t.co/zoV7PGDR0t

Millman, 18, enters his second full season with the Spirit during the 2019-20 season. The Spirit drafted Millman in the seventh round, 124th overall, in the 2017 Under-17 Priority Selection. Millman’s 25 points last season ranked him fourth in the OHL among rookie defenseman. The Flyers selected Millman in the fourth round, 103rd overall, to make him the first Spirit player ever selected by the Flyers organization.

The Spirit continue their preseason schedule on Friday, Sept. 13 hosting the Flint Firebirds at The Dow Event Center. The puck drops at 7:05 p.m. General Admission $8 tickets are on sale now at the Saginaw Spirit Store at 5789 State Street and by phone at (989) 497-7747.