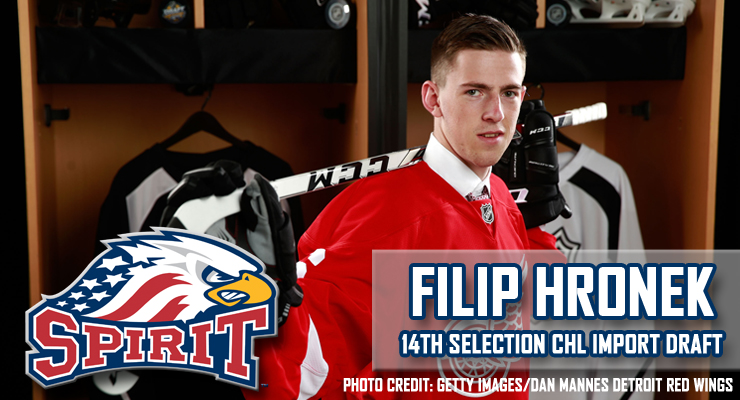 Hronek, 18, ranked eighth amongst European skaters in the final NHL Central Scouting Rankings. The 6’0”, 163-pound native of Hradec Kralove, CZE competed in the 2016 U-20 World Junior Championship where he tallied two assists in five games.

“Has always been a fine puck mover with offensive instincts, but showed vast improvement at the defensive end while playing a regular shift against men in the Czech Extraleague this year. One of the headiest power play quarterbacks in the draft. Reads developing plays beautifully and distributes the puck to right spots with vision and fine passing touch.”

Spirit General Manager Dave Drinkill was pleased to add such a gifted player to the Spirit roster.

“Filip Hronek is a player that makes the Saginaw Spirit a better hockey team moving forward. Hronek has high end skill and is a right shot, puck-moving defenseman that will help our power play and generate offense from our backend.”

Drinkill is also hoping the short two hour drive between Detroit and Saginaw will help Hronek adjust to life in Michigan and help the Red Wings evaluate the progress of their young prospect.

“He is a second round pick of the Detroit Red Wings and now will be able to play down the road where they (Detroit) can watch him develop as the season goes on.”

“The addition of Hronek gives our organization three NHL drafted defensemen for our head coach Spencer Carbery to work with, and feel it addresses a need for the organization. We are excited to welcome Filip to the organization and look forward to what the season has in store.”