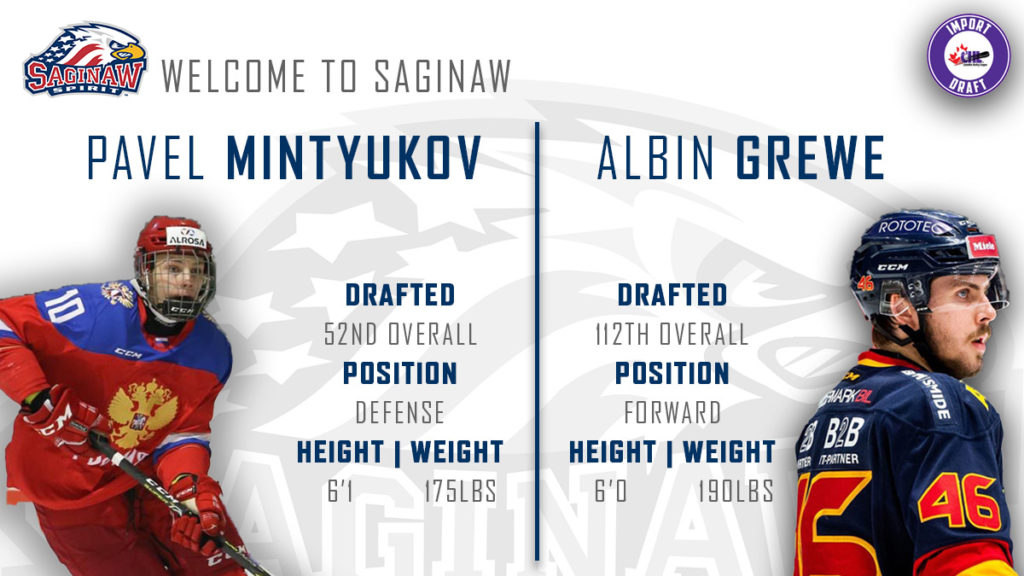 The Saginaw Spirit made two selections in today’s CHL Import Draft, adding a defenseman and a forward to the roster for next season.

With Saginaw’s first pick 52nd overall, they selected 6’1” 175lbs Russian defenseman Pavel Mintyukov. Mintyukov is a late 2003 birth year who spent last season with MHK Dynamo Moskva of the MHL. He also suited up for Russia at the World U17 Challenge, where he posted 5 points in 6 games. “Pavel is a player that really jumped out to us at the U17 tournament this past season. He is a mobile defenseman with a lot of skill, and one that has really grown his game as the season went on in the MHL. We believe there is tremendous upside with him and we can’t wait to get started with him here in Saginaw” said Spirit GM Dave Drinkill. When reaching out to Pavel he had this to say about being drafted by Saginaw today “I am very excited to join the Saginaw Spirit. Saginaw is known for their NHL development and I just can’t wait to be a part of this organization”

In the second round 112th overall the Spirit selected Detroit Red Wings 2019 third round pick Albin Grewe. Grewe, a 6’0” 190lbs winger from Sweden split last season with Djurgardens in both the SuperElit and the SHL league. Combined he played in 42 games scoring 7 goals and 13 assists for 20 points to go along with 117 penalty minutes. “To be able to add an impact player like Albin to our strong core of forwards for next season is very exciting. Grewe is a very competitive and tenacious player that works extremely hard and pushes the pace when on the ice. His mix of skill and high compete will fit in well with our team here in Saginaw and I know our coaches can’t wait to see him in our uniform next season” said GM Dave Drinkill.

The Detroit Red Wings selected Grewe 66th overall in the 2019 NHL Draft and he has also suited up internationally many times for team Sweden at the U17 and U18 World Championships and also the Hlinka/Gretzky Cup.

The Saginaw Spirit organization would like to welcome both Pavel and Albin to the family.