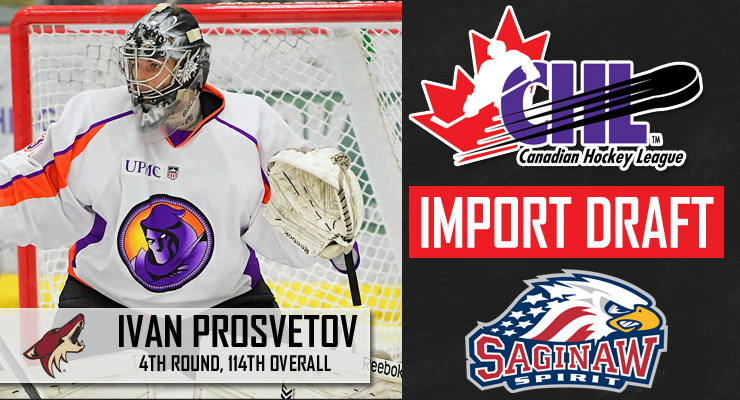 Russian goaltender selected in first round of CHL Import Draft

The Saginaw Spirit has selected goaltender Ivan Prosvetov (EYE-vin PROS-vee-ah-tov) with the 15th overall pick in the 2018 CHL Import Draft Thursday. After passes from Calgary (8) and Moncton (13), the Spirit made their pick from the 13th position.

“We are pleased to select Ivan Prosvetov in the CHL Import Draft and welcome him to the Spirit family,” said Spirit General Manager Dave Drinkill. “He is a very big, athletic, and competitive goalie. His skills were put on display this season when he led Youngstown to the Clark Cup Final. We are excited about his upside and potential and look forward to getting him started with us in training camp.”

The six-foot-five, 175-pound netminder was selected in the fourth round, 114th overall by the Arizona Coyotes in the 2018 National Hockey League Draft and is currently attending their development camp in Glendale, Arizona. He was the eighth highest drafted goaltender in this year’s NHL Draft.

Additionally, Prosvetov was taken with the sixth overall pick in the 2016 Kontinental Hockey League Draft by HK Sochi.

In the 2017 CHL Import Draft, a total of 72 players were selected from 11 different countries led by 19 players from Russia and consisting of 50 forwards and 22 defensemen.