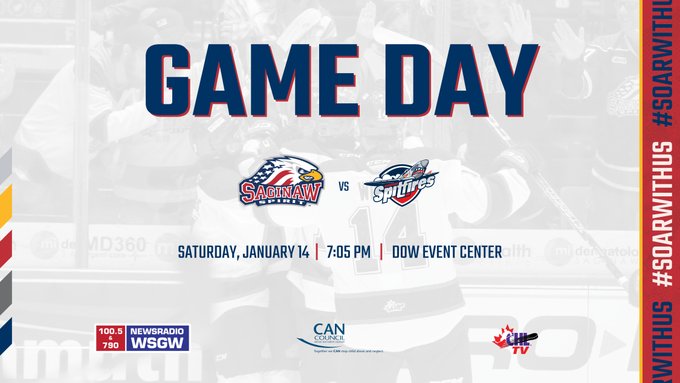 Saginaw fell to Windsor 7-4 Thursday, January 12, at the WFCU Centre in Windsor, Ontario. Dean Loukus scored two goals for the Spirit, and Rodwin Dionicio earned three assists for the Spitfires. In his Windsor debut, Shane Wright chipped in with an assist and an empty net goal.

The Spirit and the Spitfires have faced off five times this season, with Windsor winning three of the five games. On October 8, Windsor won 5-4 in Saginaw. Vegas Golden Knights prospect Matyas Sapovaliv scored two goals and an assist for the Spirit. Five different Spitfire skaters scored, including Alex Christopoulos, who scored the game winner.

On October 20, Saginaw won their first game against the Spitfires with a 3-2 OT win in Windsor. Dean Loukus tied the game late in the second period, and Mitchell Smith scored the game winner just 22 seconds into OT for the Spirit.

November 26 saw Saginaw win 7-2 at home after Zayne Parekh scored two goals and two assists for his team. Alex Christopoulos and Liam Greentree both scored a goal for Windsor in the loss.

Windsor evened up the series with a 5-2 win on January 4. Michael Misa scored his 19th goal of the season for the Spirit and Ethan Miedema earned two assists for the Spitfires.

The Spitfires took the series lead Thursday, January 12, in Windsor with a 7-4 win. The Spirit were able to come back from a 5-1 deficit to make it 5-4, but Windsor scored two goals in the third to put the game out of reach.

Minnesota Wild prospect Hunter Haight has recorded a point in every game but two since he joined the Spirit on December 1. In 14 games, he has seven goals and 13 assists (20 points). 15-year-old Michael Misa leads both the Spirit and his OHL rookie class in points (41) as well as goals (19). Michigan native Dean Loukus’ 21 assists are the most for any Saginaw skater. He also scored two goals in his last game. New York Islanders prospect Tristan Lennox leads Saginaw’s goaltenders with a 3.03 goals-against average (GAA) and an .888 save percentage (SV%).

Seattle Kraken prospect Shane Wright joined the Spitfires earlier this week and was immediately effective. Along with his two-point performance, Wright went 12/17 from the faceoff circle on Thursday. Matthew Maggio is tied for the OHL lead with 29 goals and is tied for fourth in points with 53. The New York Islanders prospect also leads the Spitfires in both categories. Oliver Peer’s 28 assists top all Windsor skaters, with two coming in his last game. Goaltender Joey Costanzo leads the Spitfires with a 2.97 GAA and a .905 SV%.