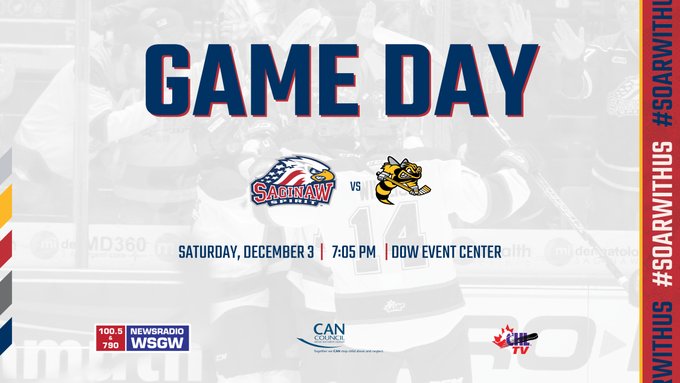 The Spirit settled for one point in a 4-3 overtime loss to the Soo Greyhounds Friday, December 2, at the GFL Memorial Gardens in Sault Ste. Marie, Ontario. 15-year-old Michael Misa earned two assists in the overtime loss.

The Sting dropped a 6-5 shootout decision against the Oshawa Generals Friday, December 2, at the Progressive Auto Sales Arena in Sarnia, Ontario. OHL leading scorer Ty Voit scored a goal and two assists in the shootout loss.

Saginaw and Sarnia have faced each other three times this season, with Saginaw victorious in all three contests. Tonight marks the first time the series shifts back to the Dow Event Center this season.

After being traded from the Barrie Colts, Minnesota Wild prospect Hunter Haight wasted no time settling in by earning a goal and an assist last night in his Saginaw debut. Michael Misa’s 14 goals are the most of any Spirit player. Pavel Mintyukov leads the Spirit in assists with 23 and points with 35. The Anaheim Ducks prospect also leads all Ontario Hockey League (OHL) defensemen in scoring. Tristan Lennox’s 3.01 goals against average (GAA) and .891 save percentage (SV%) lead Saginaw’s goaltenders.

Sarnia’s Ty Voit leads the OHL in points (43) and assists (36). Sasha Pastujov leads the Sting with 15 goals and is second in points with 30.