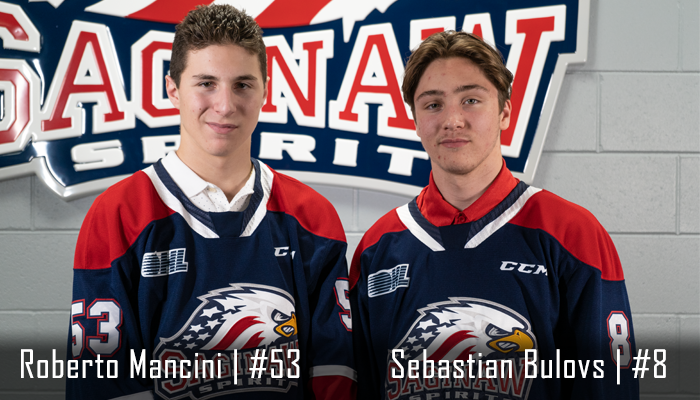 SAGINAW, MI – The Saginaw Spirit announced Thursday the signing of two players in advance of the team’s participation in the Preseason Showcase beginning Friday afternoon in Kitchener, Ontario.

The Spirit have come to terms with left wing Sebastian Bulovs and defenseman Roberto Mancini on an OHL Standard Player Agreement and Education Package.

“As an organization, we are pleased that these two players have committed to be a part of the Saginaw Spirit family, said General Manager Dave Drinkill. “By signing Sebastian and Roberto, we continue to build our team with homegrown talent. Sebastian brings an element of speed and skill, while we like the grit and mobility that Roberto brings to our defense. We look forward to watching them grow as hockey players, and as people.”

Bulovs, 17, was taken in the fourth round, 65th overall, in the 2018 Under-17 Priority Selection Draft. Bulovs spent the 2018-19 season with the Brampton Admirals in the Ontario Junior Hockey League, scoring seven goals and six assists in 47 games.

Mancini, 16, is a 2019 draft pick, selected in the fifth round, 88th overall, out of the Mississauga Reps Midget program. The Vaughan, Ontario native led all defenseman on his team in scoring with 12 goals, and 17 assists, for 29 points in 49 games.

Both Bulovs and Mancini will join the rest of their teammates at the Preseason Showcase in Kitchener this weekend.

The Spirit host the Flint Firebirds at The Dow Event Center on Friday, September 13 in preseason action. Puck drop is scheduled for 7:05 p.m. $8 general admission tickets are on sale now.