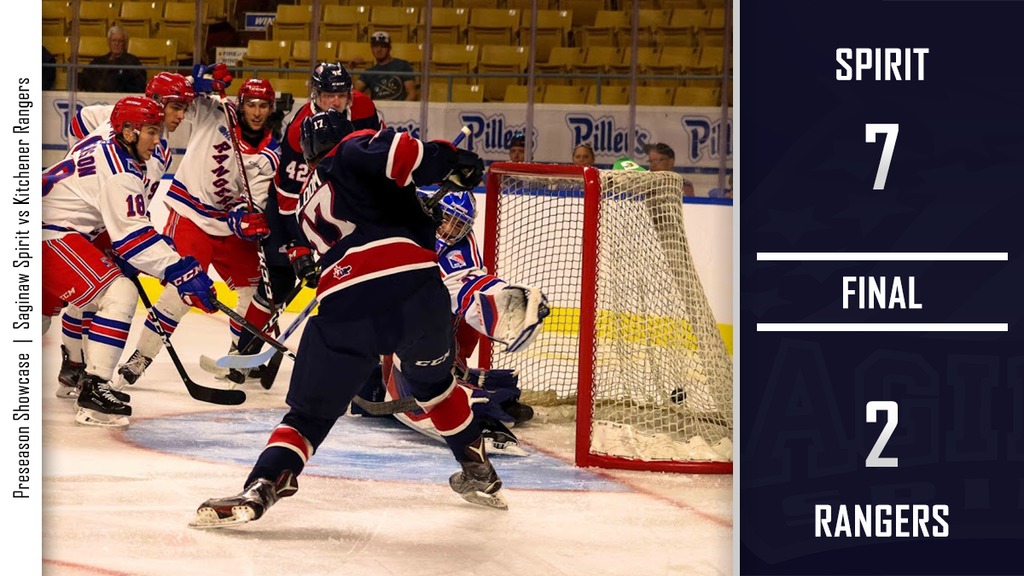 SAGINAW, MI – The Saginaw Spirit took the ice Saturday night or the second of three games this weekend at the Preseason Showcase. Tonight, the Spirit knocked off the host Kitchener Rangers 7-2  at Kitchener Memorial Auditorium in Kitchener, Ontario.

The Spirit opened the scoring for the second consecutive game in the first period, when 2019 second round pick Josh Bloom scored his first goal of the preseason. Bloom jammed in the puck after being setup by Jake Goldowski and Camaryn Baber at 3:40 of the first period.

Nicholas Porco scored his second goal of the preseason two give the Spirit a two-goal lead at 8:13. Previous to his goal, Porco leveled Kitchener defenseman Justin MacPherson with an open-ice body check. Ivan Prosvetov made 13 saves in the opening period, allowing the Spirit to escape the opening period with a 2-0 lead.

Much like Friday’s game against Peterborough, the Spirit relented in the middle frame and aloud the Rangers to claw back in the game. Jonathon Yantsis and Donovan Sebrango would score in the period for the Rangers and the game was tied at 11:11. Import pick Ilya Solovyov put the Spirit back in front at 12:38 with a quick snap shot from the left circle for his first goal of the preseason. 1:50 later, Sebastian Bulovs scored his first preseason goal to reinstate the Spirit two-goal advantage heading into the break. Saginaw outshot Kitchener 13-10.

The Spirit took over the game for good in the third period when Blade Jenkins and Nicholas Porco each scored their third goal of the preseason. Saginaw native Mitchell Smith added to the Spirit lead at 15:44 to give the Spirit a 7-2 advantage. The Spirit outshot Kitchener 17-12 in the final frame and 38-35 in the game.

The Spirit wrap up the Preseason Showcase Sunday when they face the North Bay Battalion at 11:00 am.