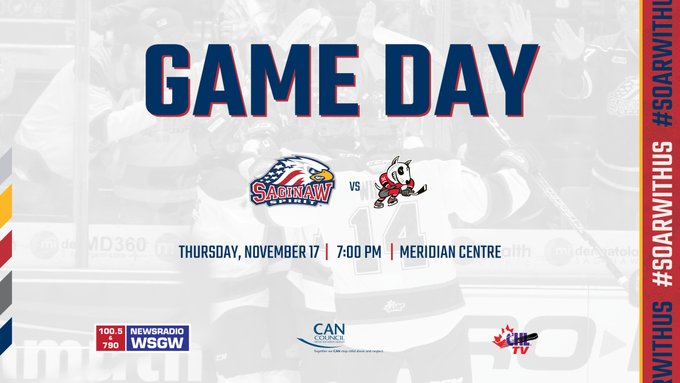 St. Catherines, Ont. – The Saginaw Spirit (12-6-1-0) start their four-game road trip as they take on the Niagara IceDogs (4-10-3-0) at the Meridian Centre in Niagara, Ontario. They have won four games in a row, and seven out of the last ten.

The IceDogs lost 7-2 to the Ottawa 67s Saturday, November 12, at TD Place in Ottawa, Ontario. Declan Waddick scored his sixth goal of the season in the loss.

Mintyukov leads Saginaw in points with 28, in assists with 18, and is tied with 2022 OHL first overall draft pick Michael Misa in goals with 10. Misa, along with Bode Stewart and Zayne Parekh, returns to Saginaw following a trip to the World U17 Hockey Challenge. New York Islanders prospect Tristan Lennox leads the team with a 3.10 goals against average (GAA) and a .881 save percentage (SV%).

Aiden Castle leads Niagara in points with 17 and in goals with 10. David Jesus leads the team in assists with 11. Owen Flores leads Niagara goaltenders with a 4.92 GAA and a .865 SV%.

The Saginaw Spirit traded captain Josh Bloom, Brayden Hislop and a 2025 sixth round draft pick to the North Bay Battalion for Nicholas Sima, Cam Gauvreau, two second and three third round draft picks. Sima will don number 92 in Saginaw, and Gauvreau will wear 3.

The IceDogs have one (1) player drafted into the NHL. Pasquale Zito was selected by the Detroit Red Wings in the 6th round of the 2021 NHL Entry Draft.