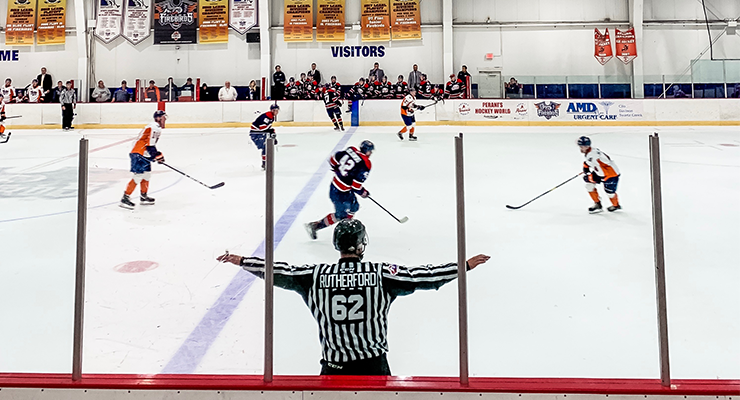 FLINT, MI. – The Saginaw Spirit finished their 2019 preseason schedule with a 3-2 record after a 6-5 victory over the Flint Firebirds at the Flint Iceland Arenas in Flint, Michigan.

An early scoring chance for the Spirit came off the stick of D.J. Busdeker, who found himself alone off to the side of the net just over a minute into action. The overager was not able to push the puck past Flint goaltender Evan Morrison in an attempt to put Saginaw in the lead.

Flint responded to the early Saginaw bid by taking advantage of their first scoring opportunity. Connor Roberts opened the scoring at 2:39, when he drove in a one-timer from the slot.

The Spirit responded at 6:32 when Cole Perfetti snapped a high wrist shot past the glove of Morrison. Perfetti’s second goal of the preseason was set up by Busdeker.

Midway through the period, rookie Sebastian Bulovs flew down the left wing and fired a shot that cleanly beat the Flint goaltender, but did not beat the left post. That chance seemed to spur the Spirit on, who were given their first power play of the game at 11:17.

Cole Perfetti used a smart play on the half boards to create some space for himself on the right side. As a Flint player checked Perfetti to the ice, he snapped home his second goal of the period to put the Spirit ahead, 2-1.

After two consecutive minor penalties were called on the Spirit, Flint enjoyed a lengthy 5-on-3 power play. Jack Phibbs snapped a high shot over the shoulder of the Saginaw goaltender to tie the game up 2-2 at 16:35.

With just 1:13 remaining in the first, the Spirit’s T-Bone Codd scored his second goal of the preseason with a spinning shot from the bottom of the right circle. Danny Katic and Josh Bloom picked up assists on the goal for Codd.

Saginaw took a 3-2 lead in to the first intermission, outshooting Flint, 16-12.

Just 31 seconds into the second period, a high sticking penalty would almost cost Flint as Saginaw native Mitchell Smith fired a shot off the crossbar. Saginaw would be unsuccessful on that man-advantage, but still held a 3-2 lead.

The Spirit extended their lead at 15:28 with Jake Goldowski’s third goal of the preseason on the power play. A spin-around pass from the right side by Camaryn Baber split the Flint penalty killers, who were defending the Spirit power play in a tight box.

After a Spirit penalty, D.J. Busdeker put Saginaw in the driver’s seat with a shorthanded goal for his first of the preseason. Cole Perfetti broke out of the Spirit zone and went one-on-one with the Flint defender. His shot handcuffed the goalie, who left a rather generous rebound for Busdeker to mop up at the side of the goal. The Spirit led 5-2 after 40 minutes.

A late second period penalty from 2019 first round pick Connor Punnett would give Flint an early chance to close deficit on the scoreboard. Just 17 seconds into the period, 2019 first round pick of the Firebirds, Brennan Othmann fired a one-timer in the net for his fourth goal of the preseason.

Damien Giroux’s younger brother Zacharie then scored for the Firebirds to close the Spirit lead to one goal at 2:10.

Just 2:13 later, Jack Wismer tied the game up for Flint. For the second straight night, Flint had erased a deficit of two-or more goals in the third period.

Just 2:02 after the Wismer scored to tie the game, the Spirit took the lead for good on a power play goal from Jake Goldowski, who jammed in a rebound at the side of the net. Camaryn Baber picked up his second assist of the night, while Reilly Webb also assisted on the play.

The Spirit tightened up the rest of the way and held Flint down even after they pulled their goalie for an extra attackee with a little under two minutes remaining.

Saginaw opens the 2019-20 regular season on Friday, September 20 when they take on the Kitchener Rangers at the Kitchener Memorial Auditorium. Puck drop is scheduled for 7:30 p.m.