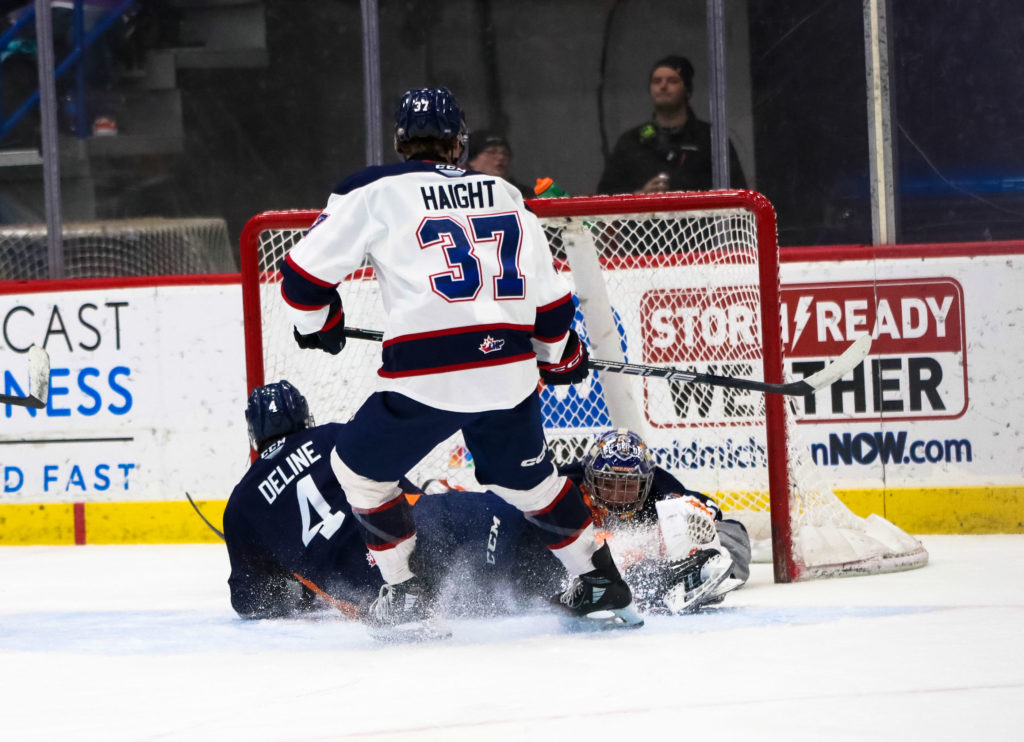 Matyas Sapovaliv scored a goal and an assist and Andrew Oke made 30 saves on 33 shots. Amadeus Lombardi scored two goals and Nathan Day made 27 saves on 29 shots. After tonight’s game, the Coors I75 Divide Cup standings are now 4-2 in favor of Saginaw.

The game started with the Firebirds finding their way on the board first at 5:00. Zacharie Giroux gave Amadeus Lombardi the puck in the neutral zone. Skating down the left wing, the Detroit Red Wings prospect put the puck between Oke’s legs to make it 1-0.

Blake Smith committed a cross check at 10:34 in the first frame, though the Spirit failed to convert on their first man-advantage of the game.

Flint got their first man-advantage after Nic Sima took a tripping penalty at 12:54 in the opening period. The Spirit denied the Firebirds from scoring with several clearing attempts.

Roberto Mancini cleared the puck over the glass in Saginaw’s zone and was called for delay of game at 15:28 in the first period. The Spirit killed off the penalty by controlling the puck during the chance.

Saginaw tied the game up with six seconds remaining in the opening frame. Dean Loukus passed to Matyas Sapovaliv at the top of the circles. A scrum ensued after the Vegas Golden Knights prospect took a shot at Day. The rebound was grabbed by Rochester Hills, Mich. native Liam Storch and put into the net for his second of the season.

At the end of the first period, both teams were tied in shots at 11 and in score with one apiece.

The second period opened with a goal from Saginaw 70 seconds in. Theo Hill skated into the zone and set up a one-timer pass to Matyas Sapovaliv on his right. The center fired a shot past Day’s glove to take a 2-1 lead.

Flint answered back with a goal at 4:28 in the second frame. Nolan Dann gave Gavin Hayes the puck and the Chicago Blackhawks prospect skated into the zone. Braeden Kressler received a quick pass from the forward and fired a shot past Oke to tie the game at 2-2.

Roberto Mancini committed a roughing penalty at 8:25 in the middle period, giving the Firebirds a man-advantage. Flint was able to score on the chance just 10 seconds in. Coulson Pitre started the chance by passing to Tristan Bertucci. The defenseman fired a shot towards Oke and the puck was deflected by Amadeus Lombardi to take a 3-2 lead.

At the end of the second period, the Firebirds held a 3-2 lead along with a 23-20 shot advantage.

The third period started with both teams attempting to score goals but both goaltenders standing tall in net.

Olivier Savard took an interference penalty at 10:17 in the final period, giving Flint a powerplay chance. The Firebirds were unable to score despite several shots.

With time running out, Saginaw called Oke to the bench. Flint was able to weather immense pressure from the Spirit and get an empty net goal courtesy of Zacharie Giroux with 15 seconds remaining.

The game finished with the Firebirds winning 4-2 and holding a 33-28 shot advantage. The Spirit fall to 24-16-2-0 and have lost six in a row for the first time this season.

Saginaw returns home Saturday, January 28, as they host their division rivals the Sarnia Sting at the Dow Event Center on Shocks and Saves Night. The annual Shocks and Saves game will be played at 4:00, and puck drop for the Spirit is at 7:05 p.m. and tickets are available at Ticketmaster, the Saginaw Spirit Store (6321 State Street), Dow Event Center Box Office, and by phone at (989) 497-774