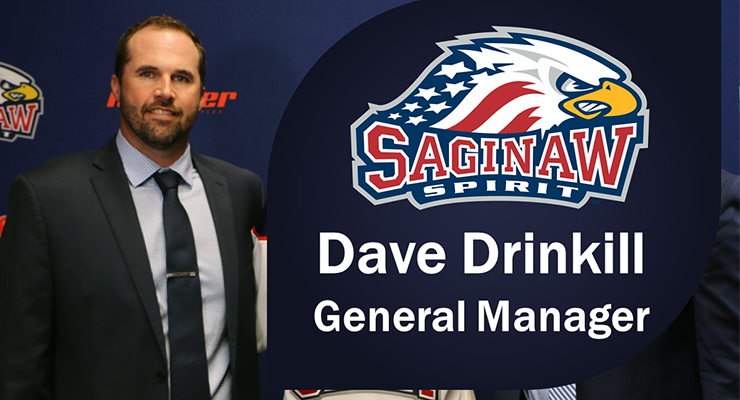 “On behalf of owner Dick Garber, partners Brandon Bordeaux, Chris Osgood and Jim Devellano, we recognize the strong effort that Dave Drinkill demonstrates every day as our General Manager,” said Team President Craig Goslin. “Dave, his coaching staff, and his scouting staff have built a championship-caliber roster and a culture for development of our players that mirrors our mission statement of developing young talented athletes, into successful people, on and off the ice.”

Drinkill is in his fourth season as General Manager of the Spirit after spending a total of nine seasons with the Barrie Colts in multiple roles. Drinkill was promoted to Assistant General Manager prior to the 2011-12 season and was part of the 2013 Eastern Conference Champion Colts that featured future NHL talent Aaron Ekblad, Andreas Athanasiou, Mark Scheifele, Brendan Lemieux, and Mackenzie Blackwood.

“I would like to thank Messrs. Garber, Goslin, Devellano, Bordeaux, and Osgood for the opportunity to continue to build this franchise and head towards our ultimate goals,” said Drinkill. “I would also like to thank the Hockey Operations and Business Staff for supporting me and working tirelessly for this organization, as we all continue to row in the same direction here in Saginaw.”

“I am very excited to be part of the Spirit family,” continued Drinkill. “I have always said that Saginaw is a hidden gem in the OHL and is a great place for young players to play junior hockey and grow on and off the ice, as individuals. It is my job to make sure we have a product on the ice that the fans and community can support each year, and ultimately contend for the championship. I will continue to do everything I can to make this happen. I want to thank everyone for their support and I look forward to what the future has in store here in the Great Lakes Bay Region.”