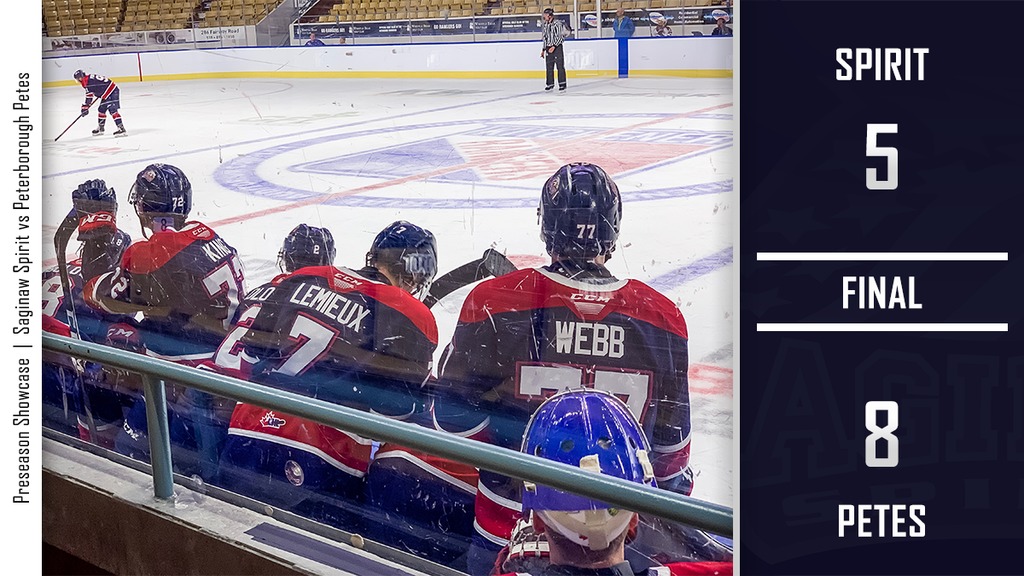 KITCHENER, ON – The Saginaw Spirit opened their Preseason schedule Friday in Kitchener, Ontario for the second annual Preseason Showcase with a (score) (win or loss) against the Peterborough Petes.

The Spirit opened the scoring when they were granted their first powerplay of the season. Blade Jenkins found himself alone at the side of the net, and deposited a rebound past Minnesota Wild goaltending prospect Hunter Jones. Reilly Webb was able to get a shot blueline through, with Damien Giroux, deflecting the shot on Jones.

Just seven seconds later, Ethan Cardwell snapped a low shot past Jones’ left pad to give Saginaw a two-goal advantage. Cardwell’s unassisted tally was created by a huge open-ice thrown by 2019 second round Import Pick Ilya Solovyov. Cardwell advanced the puck through the neutral zone, and got the quick shot away.

Late in the first period, Cameron Butler snuck behind the Spirit defense and beat Ivan Prosvetov with a shot over his glove hand. Butler’s goal was assisted by Winnipeg Jets prospect, and after a slow start for the Petes, they were able to get within one goal before the conclusion of the first period. The Spirit outshot the Petes, 15-10, and took a 2-1 lead to the locker room.

It did not take long for the Petes to even the score, as Toronto Maple Leafs pick Nick Robertson tied the game just 38 seconds into the period.

The Petes seized the lead at 17:43 of the second period, when Robertson scored yet again. The Spirit and Petes registered 16 shots apiece in the period.

Both teams flexed their offensive muscle in the third period, eight goals in the final period. Import Liam Kirk scored his first of two in the period at 1:25. 2019 first round pick Mason McTavish picked up his first point of the preseason on the goal.

Cameron Butler put the Petes up by two with an unassisted goal at 6:25.

Just over a minute later, Dallas Stars prospect Nicholas Porco led the Spirit on the comeback trail with a screenshot past Jones at 7:51.

Blade Jenkins tallied his second goal of the contest at 10:35 to tie the game 5-5. That’s when Kirk and Zach Gallant would score to pull the Petes ahead by two goals at 7-5.

Damien Giroux was checking into the boards to put the Spirit into a powerplay late in the third, but Nick Robertson would complete the hat trick with an empty net shorthanded goal to give the Petes an 8-5 outcome.

Saginaw had won their previous three games in this Showcase dating back to last season, when they consecutively beat North Bay, Kitchener, and Moncton.