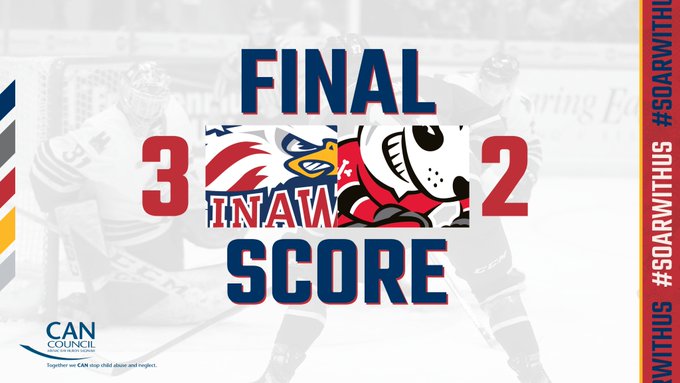 Zayne Parekh scored his first career OHL goal and Bode Stewart netted an assist after returning from the World U17 Hockey Challenge in tonight’s win.

Niagara struck first at 8:01 in the opening period. The play started with Ryan Vannetten passing to Pano Fimis for a breakaway chance. Tristan Lennox made the initial save, but the rebound fell behind him on the right side and Anthony Agostinelli scooped up the puck and potted his first goal of the season.

The first period ended with the IceDogs leading 1-0, and both teams tied at 12 apiece for shots.

The second period began with Saginaw answering back at 2:15. Calem Mangone skated the puck around the net from the left side and passed to Roberto Mancini on the right. The defenseman then shot at Owen Flores and the puck was deflected by overager Theo Hill for his fifth of the season.

The Spirit took the lead 35 seconds later. Zayne Parekh scored his first goal of the season on a wrist shot from the left side of the zone. Saginaw native Mitchell Smith passed to him from the right side of the zone, and Bode Stewart earned an assist on the play.

Niagara took an unsportsmanlike penalty at 3:58 in the middle period, giving Saginaw their first man-advantage of the game. Despite some shots, the Spirit were unable to score on the chance.

The IceDogs got a chance to try out their powerplay unit after Mitchell Smith was called for tripping at 5:48 in the second frame. Saginaw was able to kill off the penalty with help from Lennox.

Niagara went down a man after Nathan Ribau took a hooking penalty at 9:10 in the middle period. The IceDogs were unsuccessful on the chance thanks to Saginaw’s defense.

Both teams went down a skater when T-bone Codd was called for kneeing and Juan Copeland was called for roughing at 15:42 in the second frame. Neither team scored on the chance despite heightened offense.

The IceDogs tied the game late in the second period at 18:34 courtesy of Declan Waddick. Landon Cato gave the puck too Daniel Michaud who skated around the back of the net. From there, Michaud offered up the puck to Waddick who scored for his seventh of the season.

The third period started with both teams down a skater again after Calem Mangone was called for diving and Nahan Ribau was called for hooking at 2:32. Neither team was able to capitalize on the chance.

The Spirit reclaimed the lead at 6:09 in the final period. After a scrum near the right side of the net, Dean Loukus grabbed the puck and got it to Vegas Golden Knights pick Matyas Sapovaliv. The center then fed Sebastien Gervais who skated to the left of Flores and potted his second goal of the season.

Saginaw found themselves down two skaters after Roberto Mancini took a cross checking penalty and Mitchell Smith was called for unsportsmanlike conduct at 7:42 in the final frame. The Spirit were able to keep Niagara from scoring despite several shots and long possessions.

Tristan Lennox got the start for Saginaw, making 23 saves on 25 shots. Owen Flores started for Niagara, making 31 saves on 34 shots.

With the third period ending, the IceDogs pulled their goalie with just over a minute left. Despite the extra man, Niagara was unable to tie the game and the match concluded with Saginaw victorious, 3-2 and leading shots, 34-25. The Spirit improve to 13-6-1-0 on the season, winning five games in a row.

The Spirit continue their road trip Friday, November 18, as they face the Erie Otters at Erie Insurance Arena in Erie, Pennsylvania. Puck drop is at 7:00 p.m.