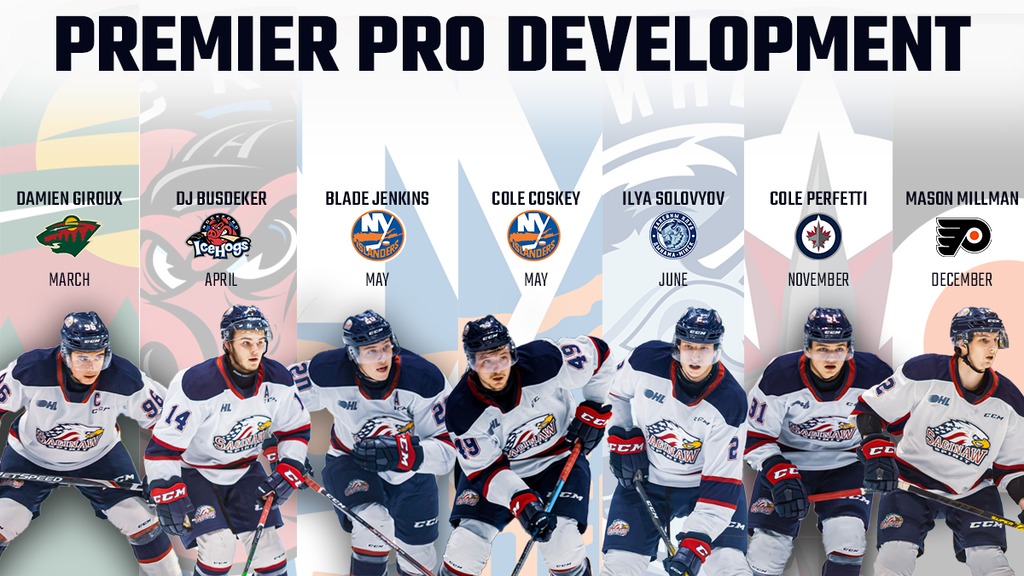 Saginaw, MI – During the COVID-19 pause beginning in March that eventually cancelled the Ontario Hockey League season, the Saginaw Spirit have stayed busy having seven players from their 2019-20 roster sign professional contracts over the last nine months.

Captain Damien Giroux signed a three-year, entry-level contract with the Minnesota Wild in March. Giroux, 20, finished third on the team in scoring during the 2019-20 season with 75 points (44G-31A) and a plus-34 rating. 10 of Giroux’s 44 goals this season were game-winning goals, tying him for the Ontario Hockey League lead in that category.

Overage forward/defenseman D.J. Busdeker was the next to sign a professional deal, inking a two-year, AHL contract with the Rockford IceHogs, top affiliate of the National Hockey League’s Chicago Blackhawks in April. The 20-year-old native of Dexter, Michigan came off of his most successful junior season accumulating 57 points in 62 games and finished with the second most shorthanded goals in the OHL (7), while playing on both sides of the puck for the back-to-back West Division Champions.

New York Islanders prospects Blade Jenkins and Cole Coskey both signed with their club on May 22. Jenkins, 19, completed his third season in Spirit red, white, and blue in 2019-20 with 16 goals, 24 assists, for 40 points in an injury-shortened, 47 games played. Coskey was selected with the Islanders’ last pick in the 2019 Draft (209th overall). Coskey was well on his way to hitting career-highs in goals (34), assists (46), points (80) and shots on goal (238) by starting the ’19-20 season on a six-game point streak. He would notch two more six-game point streaks throughout the regular season, before finishing on a seven-game, point streak.  His 11 power play goals this season also tied a career-high set during the 2018-19 season.

Just prior to the CHL Import Draft in June, the Spirit learned standout Belarusian defenseman Ilya Solovyov would not be returning, after he signed with Dinamo Minsk in the KHL. In 53 games with the Spirit, Solovyov scored 40 points (7G-33A) and was a plus-43. Solovyov was drafted by the Calgary Flames in the 2020 NHL Draft.

Spirit star Cole Perfetti had to wait until October to hear his name called 10th overall by the Winnipeg Jets at the 2020 NHL Draft. He signed a three-year, entry-level deal in November. The 18-year old native of Whitby, Ontario spent the 2019-20 season rewriting the Spirit record books. His 111 points was the most scored by a Spirit player in team history, and second most in the entire Ontario Hockey League when the league was paused in March and eventually cancelled due to the COVID-19 pandemic. Perfetti is participating in the 2021 World Junior Championships in Edmonton.

After being selected in the fourth round of the 2019 NHL Draft, Mason Millman is the latest Spirit to sign with an NHL team, inking a three-year, entry-level deal with the Philadelphia Flyers. During the 2019-20 Ontario Hockey League season, Millman led all Spirit defenseman with 44 points (13G-31A) in 58 games before the COVID-19 pause in March. The Spirit drafted the London, Ontario native in the seventh round with the 124th overall pick in the 2017 OHL Priority Selection Draft.