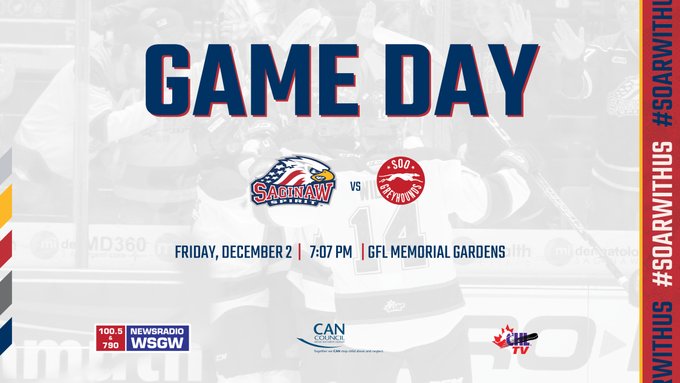 The Spirit won a 7-2 contest against the Windsor Spitfires Saturday, November 26, at the Dow Event Center in Saginaw, Michigan. Four skaters earned three or more points, including Zayne Parekh, who tallied two goals and two assists in the victory.

The Greyhounds lost a high-scoring 10-6 affair to the Hamilton Bulldogs Sunday, November 27, at the FirstOntario Centre in Hamilton, Ontario. Greyhounds winger Tyler Savard scored two goals in the loss.

Saginaw and the Soo met once already this season, with Saginaw claiming a 4-3 OT win at home on November 12. T-Bone Codd fired home the game-winner after Pavel Mintyukov tied the game with just under 16 seconds left in regulation.

Rookie Zayne Parekh is on a five-game point streak, including four points in Saginaw’s previous game. In that span, Parekh has notched five goals and three assists for eight points. 2025 NHL Draft eligible Michael Misa has earned nine points in four games and leads the Spirit in goals with 14. Pavel Mintyukov leads all Ontario Hockey League (OHL) in points with 35 and assists with 23, and was just named the OHL’s Defenceman of the Month for November. New York Islanders prospect Tristan Lennox was named November’s Goaltender of the Month, and he leads his club’s goaltenders with a 2.95 goals against average (GAA) and an .891 save percentage (SV%).

Bryce McConnell-Barker leads the Soo in points with 26 and goals with 15. Tyler leads the Greyhounds with 15 assists. Goaltender Charlie Schenkel’s .912 SV% is the second-best in the OHL, and he leads Soo goalies with a 3.00 GAA.

The Spirit acquired Minnesota Wild prospect Hunter Haight from the Barrie Colts for three second round draft picks and two third round picks on Thursday afternoon. Haight was selected 47th overall by the Wild in the 2022 NHL draft.