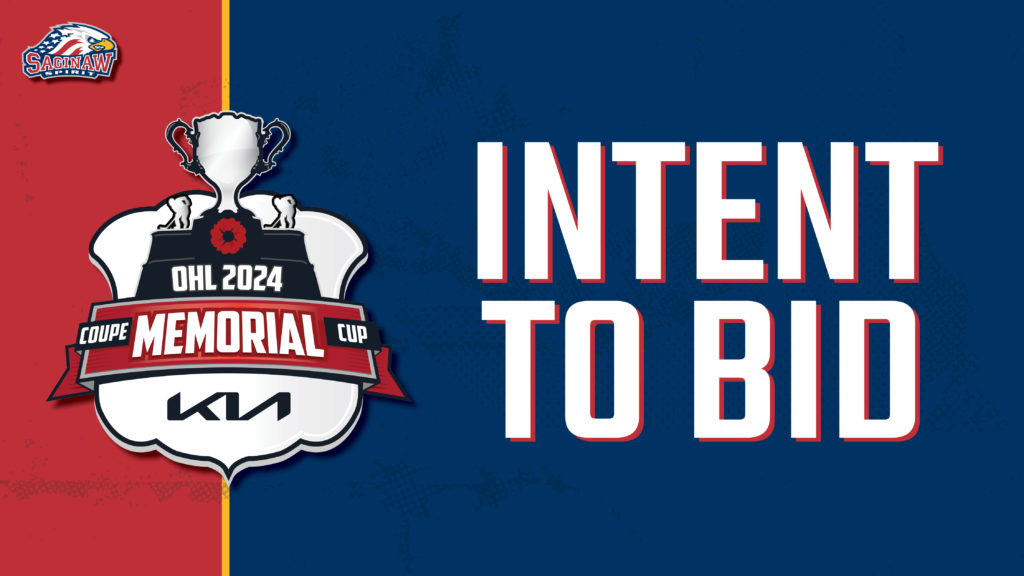 The Canadian Hockey League announced today that four Ontario Hockey League clubs have submitted intents to bid for the hosting rights of the 2024 Memorial Cup presented by Kia.

The Kingston Frontenacs, Niagara IceDogs, Saginaw Spirit, and Soo Greyhounds will each submit their bids prior to the January 31 deadline, with the winning bid then announced in March 2023.

“We are excited to have four diverse communities express their interest to bid for the 2024 Memorial Cup presented by Kia,” said Dan MacKenzie, President of the Canadian Hockey League. “The Memorial Cup is a great hockey tradition that not only celebrates the best in junior hockey but also honours the brave men and women who served and continue to serve our country.”

Open to bids from the OHL and returning to the League for the first time since 2017, the 2024 Memorial Cup presented by Kia will take place in June 2024 and will feature the playoff champion from the Ontario Hockey League, Quebec Major Junior Hockey League, and Western Hockey League, in addition to the chosen OHL host club.

“All of the OHL bidders are obviously historic franchises that will be outstanding hosts for the 2024 Memorial Cup,” said Craig Goslin, President and Managing Partner of the Saginaw Spirit. “In Saginaw, we feel that the opportunity to host is perfect timing.  In 2024, the Saginaw Spirit roster will be filled with championship quality talent.  This will include exceptional status player Michael Misa, as he will be competing in his second OHL season.

“We also have the right decision makers in the right places to support our bid with the state of Michigan, Saginaw County, City of Saginaw and throughout the Great Lakes Bay Region,” Goslin continued. “If the Saginaw Spirit were awarded the honor of hosting the 2024 Memorial Cup, we will do so with great respect for the tradition the event richly has earned and deserves. We feel confidently, together, we will be in a strong position to present a memorable Memorial Cup experience for the CHL, the teams and their communities.”

The Frontenacs, IceDogs, and Spirit would all be first-time hosts of the Memorial Cup, while the Greyhounds both hosted and won the year-end tournament in 1993 following past participation in 1985, 1991, and 1992.