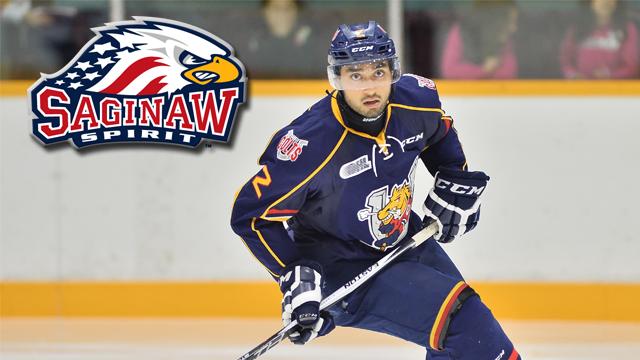 Sadowy, 19, is a second round pick of the Saginaw Spirit in the 2012 OHL Priority Selection Draft. The Woodbridge, Ontario finishes his 3+ year career with the Spirit fifth all-time in goals (91), 14th all-time in assists (81), and ninth all-time in points (172). Sadowy played 230 regular season games and 12 playoff games in a Spirit uniform. Sadowy became the 49th player in team history to be taken in the NHL Entry Draft when the San Jose Sharks made him their third round pick in 2014.

“On behalf of our entire franchise, we are very grateful of the hockey player that Dylan Sadowy is, but we are equally as proud of the person that he has become,” said Spirit President and Managing Partner Craig Goslin.

“On and off the ice, Dylan has always illustrated great character, outstanding work ethic, and a competitive spirit and mindset.  He will always be a Saginaw Spirit and we wish him all the best in his future professional hockey career.”

Greg DiTomaso, 19, was acquired during the 2014-15 season along with Jesse Barwell from the Mississauga Steelheads. The Toronto, Ontario native had four goals and 24 assists in his Spirit career the spanned 77 games.

“We want to thank Dylan and Greg for their contributions on and off the ice during their time spent with the Saginaw Spirit, said Spirit General Manager Dave Drinkill.

“They are both great individuals and were highly sought after by teams looking to make a push for the Memorial Cup this season. As an organization, we felt that when this opportunity presented itself with Barrie, it was a perfect fit. Dylan has spent three and a half years in Saginaw and it is an emotional time for everyone, but I know he is excited to start the next chapter of his hockey career and we wish him and Greg nothing but great luck in Barrie.”

In exchange for Sadowy and DiTomaso, the Spirit acquired a plethora of draft picks to solidify the future of the hockey club. Along with the picks, the Spirit acquired hard-nosed Defenseman Rocky Kaura from the Barrie Colts. Kaura, 18, is a second-year OHL player from Mississauga, Ontario. Kaura has three points in 64 career OHL games, but is known for his intimidating size and stature, measuring 6’3, 212 pounds. Kaura was a fourth round pick, 63rd overall, of the Barrie Colts in the 2014 OHL Priority Selection Draft.

“Rocky Kaura is a player the fans will like to see play because he will do anything for the crest on the jersey,” said Drinkill of the newest Spirit rear guard.

“He is a big, strong, shut down defenseman that will compete hard each shift. Rocky will help add to the culture we are creating in the room as he is a very bright, well-educated young man that respects others and will do anything it takes to be a winner.”

The Spirit also added nine drafts picks and two conditional draft picks in the trade. The two conditional picks depend on whether Sadowy and DiTomaso play out their overage season.

“By obtaining these picks we continue to add valuable assets to our organization that we can use to acquire players we want going forward,” said Drinkill.

“Our philosophy is to get the player you want in a deal, and if you can’t, then you have to find different avenues to get things done and be able to get players you want in the near future. We have accomplished this today.”

Kaura and the rest of the Spirit head to London Friday night to take on the Knights at Budweiser Gardens. The Puck drops at 7:30.

Get to know more about the newest Spirit player, Rocky Kaura, by clicking here.