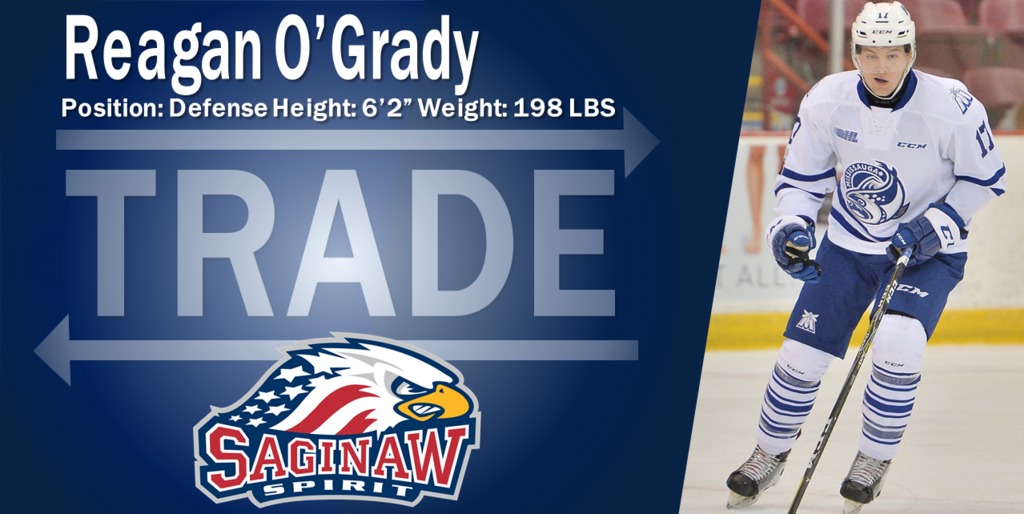 “Reagan O’Grady is a player we have kept an eye on for quite a while and we are pleased to be able to acquire him today,” said Drinkill. “He brings leadership and a wealth of experience to our backend having played in 230 regular season OHL games over the past four seasons. I know Reagan is looking forward to getting started with our team on the ice and also in our community, and I would like to welcome him to the Saginaw Spirit family.”

O’Grady, 19, was a former captain of his Toronto Marlies Minor Midget team heading into his OHL Draft season. The Kingston Frontenacs made O’Grady their first round pick, 15th overall, in the 2014 OHL Priority Selection.

Previous to the 2014-15 season, O’Grady was invited to participate at the World Under-17 Hockey Challenge for Team Canada. During his OHL tenure, O’Grady has suited up for the Frontenacs, the Sudbury Wolves, and the Mississauga Steelheads appearing in 230 OHL regular season games.

In the summer of 2017, O’Grady was invited to participate in Toronto Maple Leafs Prospect Camp along with new Saginaw teammate Cole Coskey.

Before being traded at last season’s deadline to the Mississauga Steelheads, O’Grady was a part of the Sudbury Wolves leadership group, as one of the team’s alternate captains.

O’Grady will join his Spirit teammates this week as they prepare for their first road test of the season Thursday night in Windsor. O’Grady is scheduled to make his Dow Event Center debut on Saturday, Sept. 29, when the Spirit host the Guelph Storm.

For tickets and more information regarding the Saginaw Spirit, visit saginawspirit.com