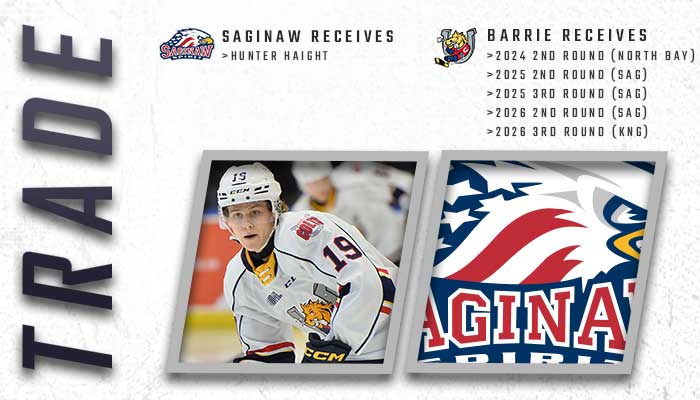 “Today is a great day for the Spirit organization and we want to welcome Hunter Haight to Saginaw,” said Drinkill. “We are thrilled to be adding Hunter to our organization and can’t wait to see him on the ice in a Spirit uniform.”

The Strathroy, Ont. native was selected by the Barrie Colts ninth overall in the 2020 OHL Priority Selection. Two years later, Haight was selected by the Minnesota Wild as the 47th overall pick of the 2022 NHL Draft. Through 20 games in Barrie this season, the 18-year-old has compiled three goals and six assists for nine points.

“Hunter is a player we have really coveted going all the way back to his draft year in 2020, and to be able to acquire him today is very exciting,” continued Drinkill. “Players of this caliber who have years of eligibility left in our league don’t become available very often. We feel he will make an immediate impact on our already strong group of forwards both this year and the next.”

Haight joins the Spirit with 83 games of OHL experience, accumulating 25 goals, 25 assists, and 50 points in that time. In his most recent outing with the Colts, the right-handed center notched the game winning goal in a 4-2 win over the Erie Otters on November 26.

“This is a very exciting time for me in joining the Saginaw Spirit,” said Haight. “I know this is a well-respected organization with a great team from the top down. I can’t wait to get started with my new teammates, build relationships, and play in front of the Saginaw fan base.”

The acquisition of Haight comes two weeks after a deal with the North Bay Battalion brought five draft picks to Saginaw along with Nic Sima and Cam Gauvreau.

“The trade we made a few weeks ago allowed us the flexibility to make a move like this and use the draft picks we acquired in that deal,” said Drinkill. “Hunter brings an extremely high skill level to our group, and I know that once he gets into our system with our coaching staff, his game will take off.”

Prior to being drafted into the OHL, Haight was a standout with the Elgin Middlesex Chiefs U16 AAA squad. In his final season of ALLIANCE hockey, Haight propelled himself to the top of OHL draft boards with 32 goals, 26 assists, and 58 points in just 33 games.

Haight will join the Spirit ahead of their meeting with the Sault Ste. Marie Greyhounds on December 2nd. Puck drop from GFL Memorial Gardens is set for 7:07pm.