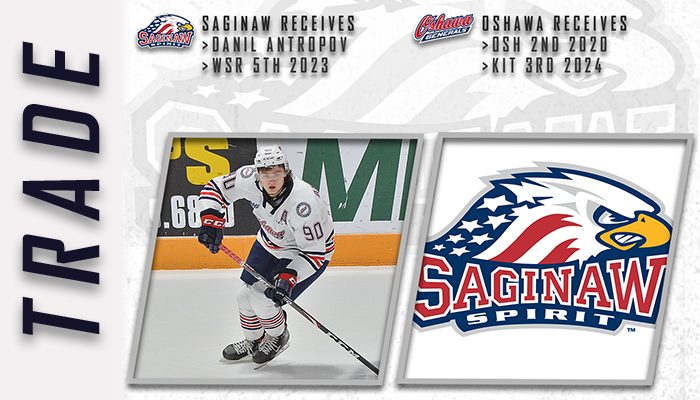 “Antropov is a player we identified and targeted going back to this past summer and we are happy to be adding him to the Spirit family,” said Drinkill. “Danil adds size, skill, and leadership to our forward group and we feel he will adapt perfectly to the way we want our team to play. He is a former high draft pick in the OHL, has been to an NHL camp, and has produced in our league. We look forward to continuing to develop him here in Saginaw and see what he can do in a Spirit jersey. ”

The North York, Ontario native was a first round pick (6th overall) back in the 2016 OHL Priority Selection Draft by the Generals. The 6-foot-1, 186-pound left-winger has six goals and seven assists in 23 games this season, but is coming off of a career season in 2018-19. Antropov had 15 goals and 37 assists in 66 games last year.

Danil Antropov will wear No. 92 with the Saginaw Spirit.