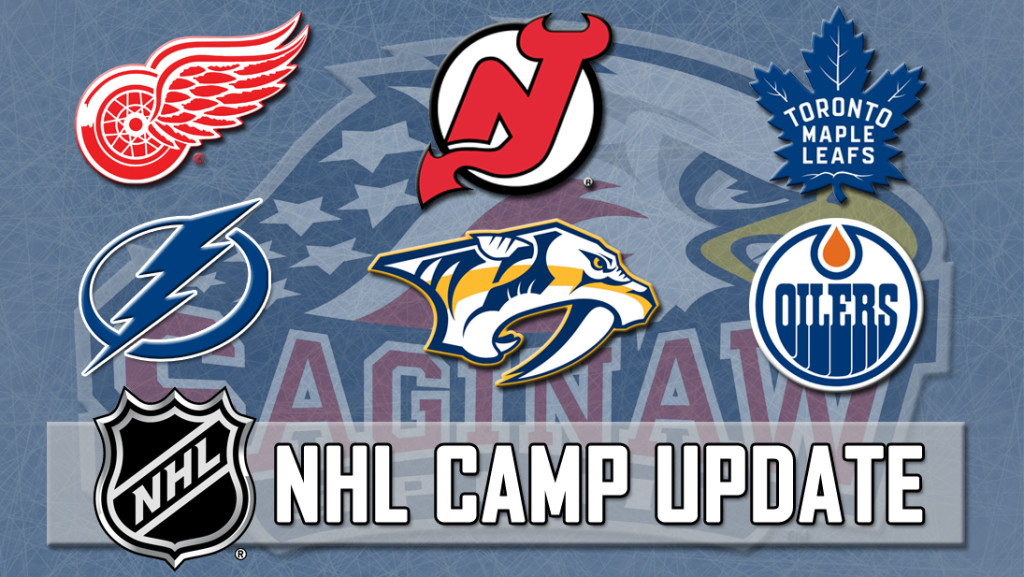 SAGINAW, Mich. – Six Saginaw Spirit players and one prospect were bestowed the honor of skating in National Hockey League Development Camps this summer.

“We are very proud of our players that have attended NHL development camps this summer.” said Spirit general manager Dave Drinkill. “This is a big accomplishment in their career and will help them learn what it takes to be a professional hockey player. Congrats to Mitchell, Keaton, Tye, Markus, Evan, Kris, and Filip on moving one step closer to realizing their dream.”

Stephens, 19, was invited to participate in his second Tampa Bay Lightning development camp after the Lightning made him their second round pick in the 2015 NHL Draft. Sidelined for nearly two months with a broken foot, Stephens returned in December and provided the Spirit with an offensive spark the club desperately needed. Following a 38-point in 39 game performance, Stephens got his first taste of AHL action when Tampa Bay’s affiliate Syracuse called him up to join the team after the Spirit were eliminated in the playoffs. In five games, Stephens was able to tally his first pro goal on April 9 against the Toronto Marlies.

Middleton, 18, completed his sophomore season in the Ontario Hockey League in 2015-16. His punishing style provided the Spirit with the shut-down pairing of Middleton and overaged defenseman Will Petschenig, who spent most nights playing head-to-head with the opposition’s most talented forwards. The Toronto Maple Leafs made Middleton their fourth round pick, 101st overall in the 2016 NHL Draft.

After being passed over in the 2016 NHL Draft, Tye Felhaber got the call he was looking for from the Toronto Maple Leafs, who invited Felhaber to their Prospect Camp as a free agent. After a slow start two his second season with the Spirit, Felhaber scored 32 of his 38 points from December 13th on through the end of the season.

Markus Niemelainen enjoyed a successful first season in the Ontario Hockey League after the Spirit made him their CHL Import Draft pick in 2015. The Finnish-born defenseman, standing 6’6” and weighing 205 pounds, scored 27 points during the 2015-16 season. The Edmonton Oilers picked Niemelainen in the third round of the 2016 NHL Draft, 63rd overall.

The goaltending stalwart of the Saginaw Spirit, Evan Cormier made 58 appearances during the 2015-16 season, the second most of any goaltender in the OHL. Only overage goaltender Jack Flinn of the Mississauga Steelheads faced more shots and made more saves than Cormier. The New Jersey Devils added Cormier to their plethora of goaltending prospects from the OHL by selecting him in the fourth round, 105th overall in the 2016 NHL Draft.

Heading into his overage season, Kris Bennett is coming off his most successful year in the OHL during the 2015-16 season. Bennett finished the year with career highs in Goals (24) and Points (39), while leading the team in Game-Winning Goals (4). Bennett also filled a role on the Penalty Kill, which finished in the top ten for the first time since the 2013-14 season. Bennett was invited to partake in Nashville Predators Development Camp as a free agent.

Finally, Saginaw Spirit 2016 CHL Import Pick and Detroit Red Wings second round pick Filip Hronek took part in Detroit Red Wings Prospect Camp in Traverse City, Michigan. The smooth-skating defenseman from Hradec Kralove, Czech Republic represented his country in the 2016 World Junior Championship, scoring two assists in five games. On July 14, the Red Wings signed Hronek to a three-year entry-level contract. In a recent Detroit Free Press article, Red Wings assistant general manager Ryan Martin was quoted as saying of Hronek’s destination for the 2016-17 season, “To get him (Hronek) over on a North American rink, on the smaller surface, will be very beneficial. We have a good relationship with the people in Saginaw, so that is a positive, too.”

Each of the 30 teams in the National Hockey League run development camps to help track the growth of their top prospects. In addition to previous draft picks, these teams extend an invitation to players not taken in the NHL Draft to showcase their skills to the hockey staffs of the respective teams.

While participating in an NHL development camp, a player will experience on and off ice testing that will challenge their skill as well as serve as a measuring stick for future expectations of the player.