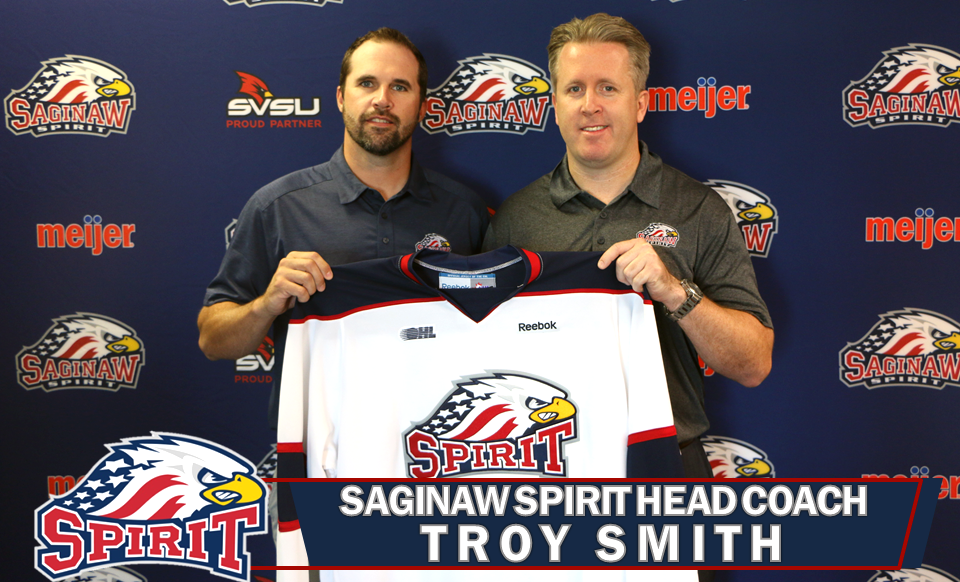 “We are very pleased to announce that Troy Smith will be taking over as the next Head Coach of the Saginaw Spirit,” said Drinkill. “When looking for a new coach we had criteria we wanted our new coach to meet and Troy checked off all the boxes. He is a person of high character, is an excellent communicator, and is extremely detailed, prepared, and hardworking. The players and the city of Saginaw will benefit with the addition of him as the Head Coach of the Spirit on and off the ice”

Smith, 39, comes to the Spirit from the Hamilton Bulldogs in the OHL, where he spent the last two seasons as their Associate Coach and Assistant General Manager. Previous to his coaching experience with the Bulldogs, Smith spent nine seasons with the Kitchener Rangers in multiple roles. From 2006-2013, Smith was an Assistant Coach under current San Jose Sharks Head Coach Peter DeBoer and Assistant Coach Steve Spott. After winning the J. Ross Robertson Cup as league champions in 2008, the Rangers were finalist MasterCard Memorial Cup that same year. Smith was a part of Kitchener Rangers teams that appeared in the Western Conference Final in 2010 and again in 2012.

Heading into the 2013-14 season, Smith was promoted to Head Coach of the Rangers. Inheriting a young team, Smith saw a 25-point improvement during the 2014-15 season.

Smith also has coaching experience at the international level, coaching in Hockey Canada’s Under-17 program from 2009-2013. As an Assistant, Team Ontario won two gold medals in three years. Smith was promoted to Head Coach of Team Ontario in 2012, where they won a Bronze Medal.

“I would like to thank Dick Garber, Craig Goslin, and Dave Drinkill for this wonderful opportunity to be the head coach of an excellent organization,” said the incoming, Troy Smith. “I am excited to work with Chris Lazary and our staff. Dave Drinkill has put together an exciting group of prospects. I am looking forward to helping them grow individually and most importantly, as a team.

Smith also enjoyed a successful playing career that began in 1995 when he was drafted by the Detroit Jr. Red Wings in the 4th round of the OHL Priority Selection. Smith played four seasons for the Detroit Jr. Whalers/Plymouth Whalers, coached by his future boss Peter DeBoer. Smith was extended invites to NHL camps in Colorado in 1996 and Carolina in 1998. After playing four years in the OHL, Smith put his education package to use and went to play hockey at St. Francis Xavier University in Nova Scotia. The X-Men were National Finalist in 2001 and 2003, before winning the National Championship in 2004. After graduating a champion, Smith played two seasons of Professional hockey from 2004-2006 with time spent in the United Hockey League, Elite Ice Hockey League (United Kingdom), and the ECHL.

“Troy’s experience as a player and a coach in the OHL and with Hockey Canada set him apart from the rest of the candidates,” said Spirit GM Dave Drinkill. “He brings a wealth of experience and knowledge to our staff, and the young group of talented players we have assembled the past few seasons. I am excited to work with Troy as we continue to build and develop through the draft and stay focused on our current path.”

“Troy comes to us highly recommended by several well-respected coaches and executives in the OHL and NHL.  He also brings a unique resume of OHL head coaching experience, a background in teaching and developing, strong work ethic, and the experience of playing for a U.S. based OHL team in Plymouth for Peter DeBoer and Steve Spott.  We also recognized Troy’s experience of playing University hockey in Canada at St Francis Xavier as a strong benefit to his resume and a valuable asset to relate and advise major junior-aged players.”

Smith will meet his charges in Saginaw on Monday, August 28th when the players begin Training Camp at The Dow Event Center.

Smith’s hire is pending based on approval of immigration paperwork.