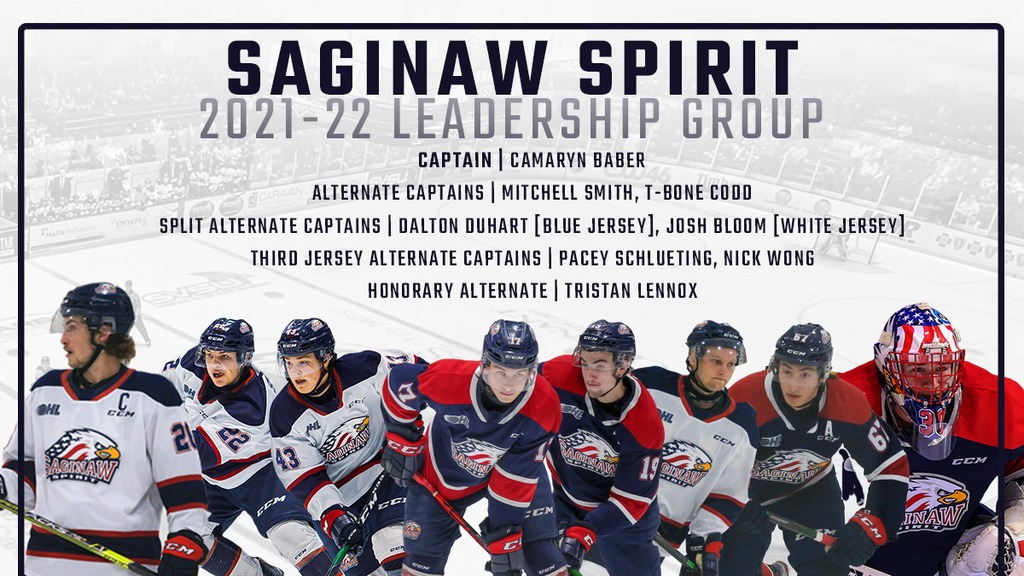 Camaryn Baber has been named the 21st captain in the history of the team. The overager from Sault Ste. Marie, Ontario enters his fourth season with the Spirit after being drafted by Saginaw in the third round, 57th overall, in the 2017 OHL Priority Selection. In 135 career games, Baber has scored 60 points (21 goals – 39 assists). Baber enjoyed his best OHL season in 2019-20, notching career-highs in goals (9), assists (18), and points (27).

Mitchell Smith has been named as an alternate captain for the 2021-22 season. The Saginaw native enters his second season with the Spirit coming off of a free agent invite to Colorado Avalanche training camp this summer. In his rookie OHL season, Smith scored 16 points (7 goals – 9 assists) in 56 regular season games before the pause.

Davis ‘T-Bone’ Codd is the other full-time alternate captain for the 2021-22 season. The Brighton, MI native and Michigan High School golf champion enters his second OHL season in the 2021-22 campaign. During the ’19-20 season, Codd scored 14 points (5 goals – 9 assists) in 53 games. Codd was invited by the Detroit Red Wings to attend the Traverse City NHL Prospects Tournament and their Training Camp. Codd was return to the Spirit in early October.

The Spirit’s third alternate captain will be split between white and dark jerseys. Buffalo Sabres prospect Josh Bloom will have the “A” on the white jersey, while Dalton Duhart will wear the “A” on the dark.

For the 20th anniversary year, the Spirit will wear an alternate jersey later in the season. On those nights, Pacey Schlueting and Nick Wong will be the alternate captains.

Also, a part of the leadership group but not wearing a letter, is goaltender and New York Islanders prospect Tristan Lennox.