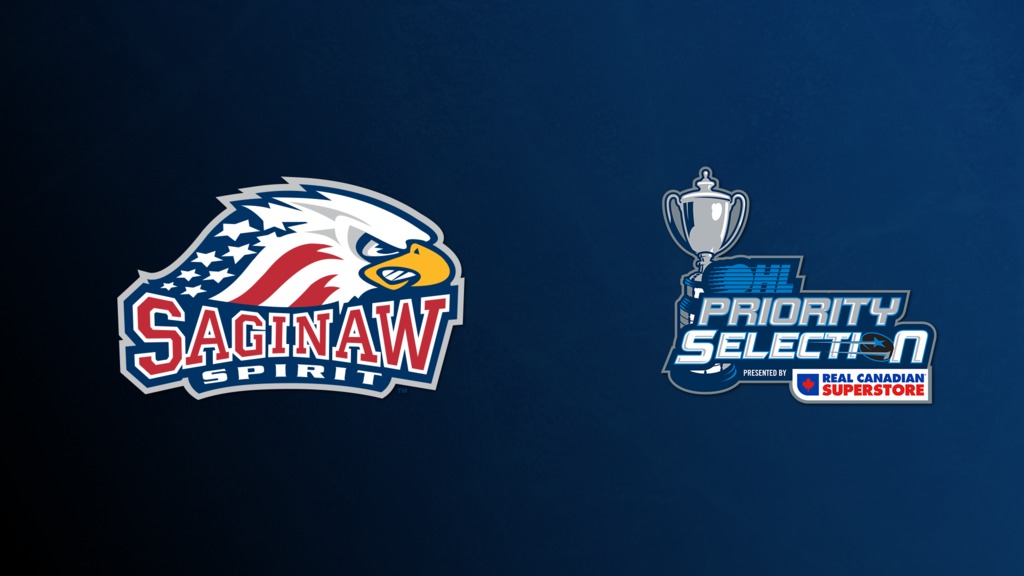 Saginaw, MI – The Saginaw Spirit took the first steps to beginning the 2022-23 season with the completion of the 2022 OHL Priority Selection on Saturday. Saginaw took a total of 13 players, including three players in the first 24 picks, overall.

The Spirit opened the 2022 OHL Priority Selection with the first overall pick of Exceptional Status player Michael Misa from the Mississauga Senators U16.

“On behalf of the entire Saginaw Spirit organization, we are thrilled to welcome a player of Michael’s caliber to our franchise,” said Spirit General Manager Dave Drinkill. “He joins a very select group of players granted exceptional status and we recognize his talents by making Michael our first overall pick in the 2022 OHL Priority Selection Draft. Michael is an elite hockey player, with high-end skills, ability and high hockey IQ to match. He is also a very dedicated, humble, young man with great character, from a great family, and a well-rounded individual, on and off the ice.”

OHL Central Scouting Report: Michael is a dynamic offensive player that was one of the driving forces for the Senators in their OHL Cup run. He plays like he has eyes in the back of his head. His vision is exceptional, he anticipates plays well and always seems to be in the right place at the right time. He received exceptional status because of his all-around game. His is not a one-dimensional player. He has tremendous hockey sense and he does the little things well. He will be able to make an impact as a 15-year-old in the OHL.

With the 19th overall pick, the Saginaw Spirit selected defenseman Zayne Parekh (per-eck) from the Markham Majors U16. In 23 games, Parekh has eight goals, 13 assists, for 21 points.

Dave Drinkill: “Zayne is a dynamic offensive defenseman and that’s exactly what we are looking for. He makes plays and makes it easier for the wingers coming off the half-wall. He fits our style and is a big need on our backend.”

Scouting Report: Zayne is one of the most skilled players in this age group.  His puck skills and vision are elite, he rarely misses a pass, and he puts pucks in areas that only his teammates can receive.  He plays the game under control and has great poise with the puck. He has a good accurate shot from the point that I think he needs to utilize more often.  He has elite hockey sense, and the game seems easy for him at times.  He is not a physical defender but does a great job of defending with his stick and using good body positioning.

With the first pick in the second round, 24th overall, the Spirit selected Michael Misa’s teammate in Mississauga, Bode Stewart. In 25 games, Stewart scored 18 goals and 20 assists for 38 points.

Dave Drinkill: Bode has a little bit of everything. He has speed, skill, and is a competitive player with size. He fits our lineup and will make an impact in his own way, right away.

Scouting Report: Bode is a versatile and complete two-way forward that can play all three forward positions effectively.  He is defensively responsible no matter the position he is playing, has a very good understanding of the game and what he needs to do in all three zones.  He isn’t a one-dimensional player offensively either, he has very good vision, composure, and patience both with and without the puck to go along with a very good shot.  He competes and finishes his checks and isn’t shy of the dirty areas on the ice.

Moving to the third round, the Saginaw Spirit selected defenseman Josh Glavin with the 54th overall pick. Glavin appeared in 31 games for Sarnia Jr. B scoring four goals, 19 assists, for 23 points.

Assistant GM Brian Prout: “Josh is a good-sized defenseman, has good mobility, and is not afraid to have the puck. He is exactly what we are looking for in Saginaw.”

The Spirit had to wait for the fifth round to make their fifth pick, 84th overall, taking left wing Kristian Epperson out of Shattuck St. Mary’s 15’s.

Brian Prout: “He’s a very powerful winger. As a comparable, I’d say an Oliver Wahlstrom type (player). He can skate, has good puck skills, and an all-around player. He can go to the tough areas or he can turn back and wait for the second wave.”

In the sixth round, the Spirit added more defensive depth by selecting Tyler McGuire 108th overall out of Windsor Jr. Spitfires. The 6’2, 181-pound rearguard had four goals, 10 assists, for 14 points in 31 games.

Head Scout Greg Hammell: “He’s a sturdy, puck-moving defenseman, physicially mature. With some development, we feel he can be an impactful defenseman for us.”

Greg Hammell: “He’s powerful. He can score. He’s played at that junior level against men and we think he is going to be an impactful player for us.”

The second eighth round pick for the Spirit, Saginaw went between the pipes, selecting Cal Gardner out of Nashville Jr. Predators 15’s.

Goalie Coach Rick Ice: “Cal is a high IQ goaltender with a foundation of tools you look for in a goalie. I’m very excited for the opportunity to work with him.”

With no picks in the ninth round, the Spirit selected right wing Griffin Grundner from Windsor Jr. Spitfires U16 in the 10th round, 197th overall.

Brian Prout: “Griffin is a tenacious winger. He gets after the puck, but also is a great playmaker. He was one of the leaders on that Windsor team. He’s a late birthday kid that we think in a year or two, can compete for a spot.”

U.S. Scout Ethan Range: “He’s a player that bring a high-end, hockey IQ. Very good vision, very good awareness within his game play and all those skills are going to translate when he makes the jump to the next level.”

In the 12th round, 224th overall, the Spirit went back to the nets by selecting Kaleb Papineau from the North Bay Trappers U16.

Rick Ice: “Kaleb is someone that has the ability to win you games. He has great size and a high compete level. Another goalie I couldn’t be more excited to have the opportunity to work with.”

With their final pick in the OHL Priority Selection, the Spirit selected left-wing Ryan Koss from the Toronto Jr. Canadiens U16.

SCTA Scout Jordan Sellinger: “He’s a big body, skates really well, can make plays. He was a guy that our head coach Chris Lazary really liked. He played on a very good team in some very big games, and we think he’s a player that can come in and surprise, and compete for a spot.”