The Saginaw Spirit announce that the team has reached terms on an OHL educational package with 2015 second round pick, left wing Kirill Maksimov. The Concord, ON native was chosen 38th overall in the 2015 OHL Priority Selection after spending this past season with the Toronto Jr. Canadiens Minor Midget program. This past season, Maksimov recorded 16 goals and 17 assists in 28 games played with the Canadiens, and he now joins Spirit first round pick Brady Gilmour, and third round selections Brendan Bonello, and Cole Coskey, as newly signed players for Saginaw.

Maksimov, who was one of two second round selections in 2015 for Saginaw, is one of four Spirit players that will skate in the 2015 Under 16 OHL Gold Cup event, which will commence later this week in Kitchener. The tournament features approximately 160 of the top players in that age bracket in Ontario. 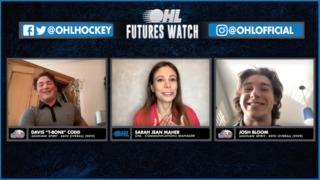 Spirit to select second in Under-18 Draft, 15th in CHL Import Draft
2 weeks ago

#OHLDraft Lottery: Impact selections from the West Division
2 weeks ago