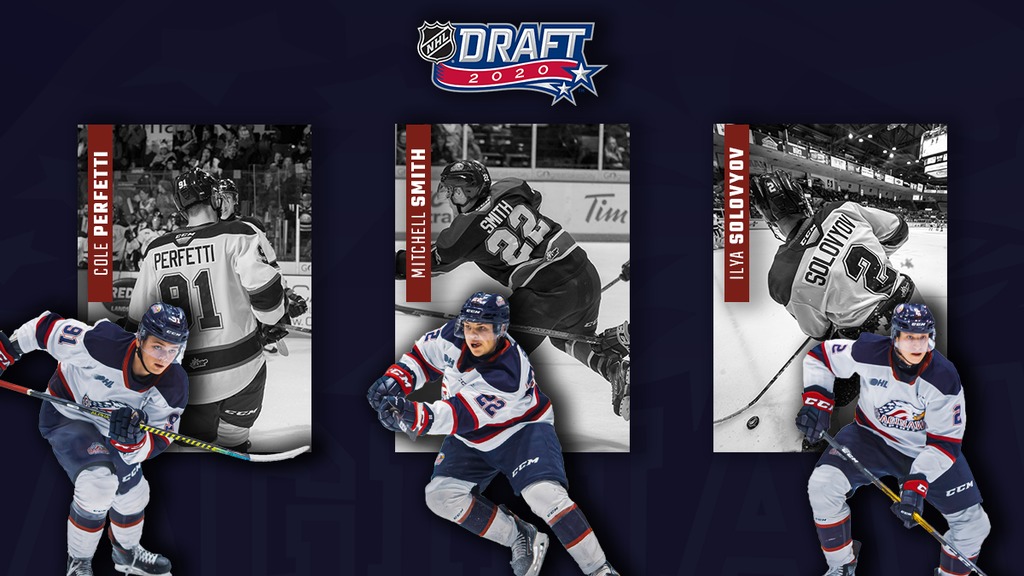 Two Saginaw Spirit players are listed on the NHL Central Scouting’s ‘Final Rankings’ heading into the 2020 NHL Draft. This year’s draft will be held virtually over a two-day span beginning Tuesday, October 6 with the opening round at 7:00 p.m. ET on NBCSN, Sportsnet, and TVA Sports. Rounds 2-7 will be held Wednesday, October 7 beginning at 11:30 a.m. ET on NHL Network and Sportsnet ONE.

Cole Perfetti is projected to become the highest selected Spirit player in Franchise history Tuesday evening. The Whitby, Ontario native led the 2019-20 Spirit in scoring with 111 points, and was the OHL / CHL Scholastic Player of the Year. Perfetti is ranked fifth among North American Skaters by the NHL Central Scouting Service.

Ilya Solovyov was given an honorable mention by NHL Central Scouting in the final rankings after being ranked 119th among North American Skaters in the Midterm rankings. The Belarusian defenseman led the Spirit back-end with 33 assists and finished second in points (40) on the roster.

Since the franchise’s move from North Bay to Saginaw prior to the 2002-03 season, the Spirit have had 60 players selected in the NHL Draft, including three players taken in 2019 from the 2019-20 roster. Defenseman Mason Millman became the first Spirit player to be drafted by the Philadelphia Flyers in the fourth round, 103rd overall. Nicholas Porco was drafted by the Dallas Stars in the fifth round, 142nd overall, and Cole Coskey became the third Spirit player selected by the New York Islanders in the last two drafts when they took him the seventh round, 209th overall.

In the franchise’s 18-year history, the most Spirit players to have been taken in a single NHL Draft was five. The franchise accomplished this feat four times, including back-to-back-to-back seasons from 2004-2006.

At least one Saginaw Spirit player has been picked in each of the last 18 NHL Drafts.

In the 2006 NHL Draft, the New Jersey Devils selected Matt Corrente in the first round, 30th overall, making him the highest Spirit draft pick in franchise history.