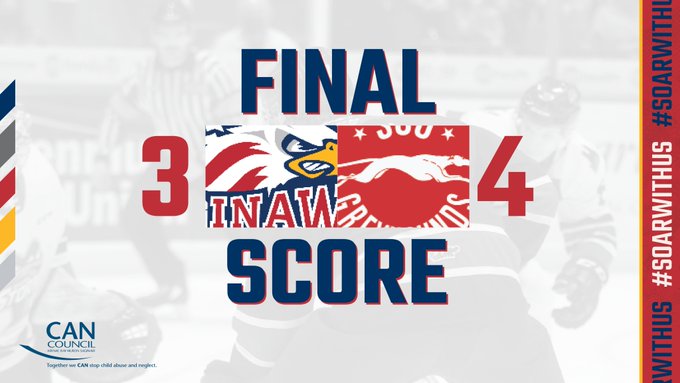 Recently acquired Hunter Haight adjusted quickly to his new team, scoring a goal and an assist in the overtime loss. New York Islanders prospect Tristan Lennox started for Saginaw, making 34 saves on 38 shots. Samuel Ivanov stopped 32 for 35 for the Soo.

The game opened with a Saginaw penalty after Ryan Thompson took a holding penalty at 1:45. Despite several shots and long possessions, the Spirit were unable to score on the chance.

Connor Clattenburg was called for a check from behind at 9:11 in the opening period, giving Saginaw another man-advantage. The Greyhounds successfully killed off the penalty.

The Soo got their first powerplay after Mitchell Smith received a holding penalty at 13:20 in the first frame. The chance yielded no goals for the Greyhounds.

Saginaw struck first at 15:57 in the first frame. Skating in his first Spirit game, Minnesota Wild prospect Hunter Haight was fed a one-timer pass from Calem Mangone. Haight positioned himself on the right side of Samuel Ivanov and potted his fourth of the season and first as a Spirit. Michael Misa earned an assist on the play.

The Greyhounds got another man-advantage after Olivier Savard committed a high sticking penalty at 18:55 in the first period. The penalty continued into the second period without a goal.

The first period ended with both teams tied at 11 shots each but Saginaw leading the game, 1-0.

The second period started with the Greyhounds on a five-on-three after Matyas Sapovaliv checked Mark Duarte from behind 24 seconds in. Despite being down two skaters briefly, the Spirit held the Soo scoreless.

Saginaw went on the power play after Ryan Thompson took a high sticking penalty at 5:09 in the second frame. The Greyhounds killed off the opportunity successfully.

PJ Forgione was called for interference at 8:51 in the middle period, giving the Soo a man-advantage. No goals came from the chance.

Later in the period, the Spirit went down a skater after Roberto Mancini committed an interference penalty at 17:30 in the middle frame. The Soo were unable to tie the game with a goal as Saginaw killed off the chance.

The third period started with Saginaw stretching their lead to two at 2:59. Overager Theo Hill started the play by passing to Nic Sima who took a shot at Ivanov. The rebound was grabbed by Sebastien Gervais on the left of the goaltender and potted for his third goal of the season.

The Soo scored their first of the contest at 7:00 in the last frame. Andrew Gibson passed to Kalvyn Watson who got a breakaway chance and scored on the right side of Tristan Lennox to earn his eighth goal of the season.

The Greyhounds tied the game just 66 seconds later at 8:06 of the 3rd period. Kalvyn Watson scored his second goal of the game by grabbing a rebound from Landen Hookey on the right side of Lennox. Bryce McConnell-Barker earned an assist on the play.

Saginaw took the lead late in the third period at 18:21 courtesy of Zayne Parekh. The rookie received a pass from Michael Misa in the neutral zone which set-up a backhand goal on a breakaway. Hunter Haight earned his first assist and second point with Saginaw on the play.

With time running out, the Greyhounds pulled Ivanov to get an extra skater and capitalized on the chance by scoring with 60 seconds left in the final frame. Jordan D’Intino shot the puck from the top right of the zone and Lennox made the save. The Spirit goaltender made a second save after Tyler Savard took a wrist shot for a rebound but was unable to stop Kalvyn Watson from scoring a hat trick to his left.

The game went to overtime with the Greyhounds leading in shots, 37-35.

In overtime, it was the Soo ended the game just ten seconds in. Bryce McConnell-Barker won the faceoff and gave the puck to Kalvyn Watson. The winger then passed to Kirill Kudryavtsev who scored his third of the season and brought Saginaw’s win streak to an end.

With the OT loss, Saginaw falls to 17-6-2-0. Both teams were unable to score on the man-advantage, with Saginaw stopping five chances and the Greyhounds stopping three chances.

The Spirit head home as they host the Sarnia Sting Saturday, December 3, at the Dow Event Center in Saginaw, Michigan. Puck drop is at 7:05 p.m. and tickets are available at Ticketmaster, the Saginaw Spirit Store (6321 State Street), Dow Event Center Box Office, and by phone at (989) 497-7747.