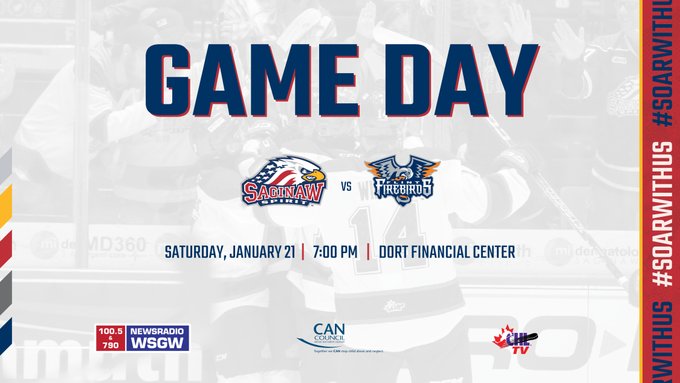 The Spirit currently hold a 4-1 lead in the eight-game season series against the Firebirds. A victory tonight would clinch Saginaw’s 4th I75 Divide Cup since the trophy’s inception in 2015.

Saginaw fell 6-3 to the Soo Greyhounds Wednesday, January 18, at the GFL Memorial Gardens. James Guo earned his first assist as a Spirit and Dean Loukus earned two points in the loss.

Saginaw and Flint have played five of their eight scheduled meetings so far this season, with the Spirit claiming four victories. Most recently, the Michigan rivals closed out 2022 with a home-and-home that saw Saginaw take all four points.

The first game was a 7-4 win for Saginaw in Flint. Three Spirit skaters earned two points, including Zayne Parekh who scored the game winning goal. Tristan Lennox made 19 saves on 23 shots to help secure the win for Saginaw. Coulson Pitre and Gavin Hayes both scored two goals for Flint, while Will Cranley made 29 saves on 34 shots.

After being acquired by Saginaw at the trade deadline, James Guo earned his first point on his new team Wednesday against the Greyhounds. Minnesota Wild prospect Hunter Haight has two goals and four assists for six points in his last four games. Dean Loukus has had particular success against Flint this season, with eight points (5G, 3A) in five games so far. 2022 OHL first overall draft pick Michael Misa’s 20 goals, 25 assists, and 45 points are the most for all Saginaw skaters. Tristan Lennox leads Spirit goaltenders, posting a 3.17 goals against average (GAA) and an .884 save percentage (SV%).

Winnipeg Jets prospect Dmitry Kuzmin is on a seven-game point streak for Flint. In that span, he has three goals and seven assists. The defenseman also leads the Firebirds in assists with 30. Detroit Red Wings prospect Amadeus Lombardi’s 51 points are the most for Flint Skaters. Gavin Hayes has the most goals for his club with 24. He also has four points in his last three games. Will Cranley’s 3.67 GAA and .891 SV% are the best for Firebird goaltenders.