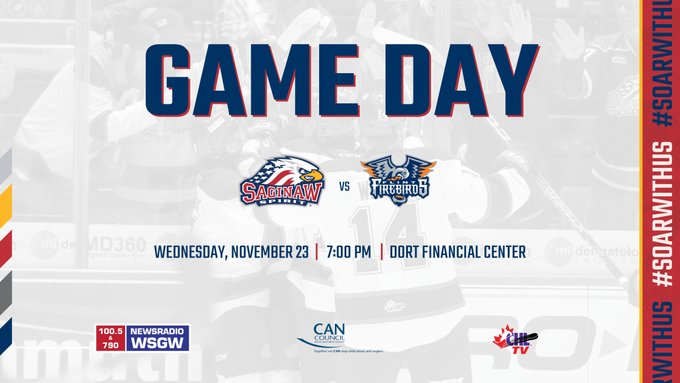 The Spirit were victorious against the Hamilton Bulldogs 5-2 Saturday, November 19, at the FirstOntario Centre in Hamilton, Ontario. 15-year-old Michael Misa scored twice in the win, and Andrew Oke stopped 26 of 28 shots.

The Firebirds were defeated by the London Knights 7-4 Saturday, November 19, at the Dort Financial Center in Flint, Michigan. Tyler Deline scored twice in the loss.

Saginaw and Flint have played each other once this season, with Flint winning 7-2 on Wednesday, October 26 at the Dow Event Center.

Overager Theo Hill has scored in the last two games and has six goals on the season. He will skate in his 200th career OHL game tonight against the Firebirds. Anaheim Ducks prospect Pavel Mintyukov leads Saginaw in points with 29 and assists with 19. His 29 points are also second in the OHL behind Sarnia’s Ty Voit (36). Michael Misa leads the club in goals with 12, including the game-winner in Hamilton Saturday night. New York Islanders prospect Tristan Lennox leads the team’s goaltenders with a 3.01 goals against average (GAA) and an .884 save percentage (SV%).

Detroit Red Wings 4th round pick Adamadeus Lombardi leads the Firebirds in points with 25 and assists with 16. The center has an assist in the last two games. Braeden Kressler leads Flint in goals with 11. Boe Piroski leads the club’s goaltenders with a 3.00 GAA and a .909 SV%.