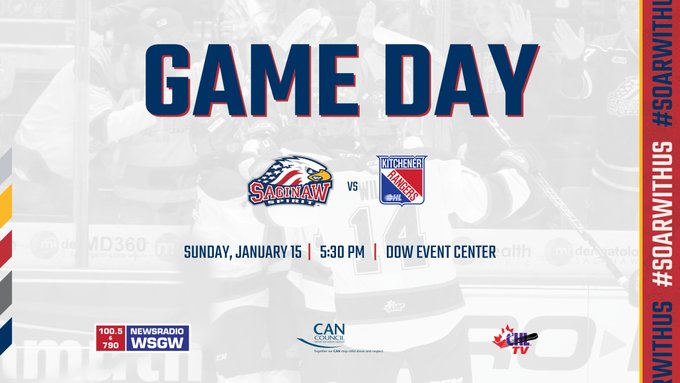 Saginaw, Mich. – The Saginaw Spirit (24-13-2-0) look to finish out the weekend with a win against the Kitchener Rangers (15-18-2-0) Sunday, January 15, at the Dow Event Center. The Spirit have lost three straight for just the second time this season.

The Spirit were defeated 5-3 by the Windsor Spitfires Saturday, January 14, at the Dow Event Center. Mitchell Smith and Hunter Haight both earned two assists in the loss. Rookie Michael Misa scored a powerplay goal for the Spirit, arriving at the 20-goal plateau.

The Rangers lost 5-2 to the Oshawa Generals Friday, January 13, at the Kitchener Memorial Auditorium. Francesco Arcuri scored his 27th goal of the season in Kitchener’s seventh straight loss.

Saginaw and Kitchener have faced off twice so far this season, with both teams taking one game. On November 4, the Rangers shut out the Spirit 1-0 in Kitchener. Roman Schmidt scored the lone goal of the game, and Marco Costantini earned his eighth career shutout by stopping the 18 shots he faced for the Rangers.

On January 6, Saginaw evened up the series with a 3-0 shutout win at home. Pavel Mintyukov earned three points, including the game winning goal. Goaltender Tristan Lennox went 21/21 for his second career shutout.

With two assists in yesterday’s game Minnesota Wild prospect Hunter Haight has been an effective scorer since he joined the team on December 1. In 15 games, he has seven goals and 15 assists (22 points). 15-year-old Michael Misa’s 42 points and 20 goals lead both the Spirit and his OHL rookie class. His 22 assists are tied with four other Saginaw skaters, including Haight, Dean Loukus, and Calem Mangone for the team lead. New York Islanders prospect Tristan Lennox leads Saginaw’s goaltenders with a 3.03 goals-against average (GAA), an .888 save percentage (SV%), and 17 wins.

Dallas Stars prospect Francesco Arcuri is fourth in the OHL in goals (27) and leads Kitchener in points (46). He and Carson Rehkopf are tied for second in the OHL for powerplay goals (13) as well. Hunter Brzustewicz has the most assists for any Ranger skater with 27. Marcus Vandenberg’s 2.85 GAA and .913 SV% are the best for Kitchener goaltenders.