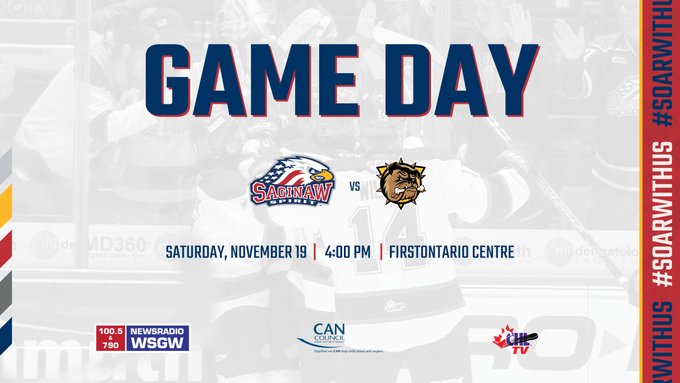 The Spirit were victorious, 3-2, over the Niagara IceDogs Thursday, November 17, at the Meridian Centre in St. Catherines, Ontario. Zayne Parekh scored his first OHL (Ontario Hockey League) goal in the win.

The Bulldogs dropped a 4-3 decision to the Ottawa 67s Friday, November 18, at the FirstOntario Centre in Hamilton, Ontario. Noah Van Vilet scored his first goal of the season in the loss.

Zayne Parekh and Bode Stewart both recorded a point in their first game back from the World U17 Hockey Challenge. Pavel Mintyukov leads the Spirit in points with 28 and assists with 18. Michael Misa, who racked up six points in the U17 challenge, is tied with Mintyukov for Saginaw’s goal lead (10). New York Islanders prospect Tristan Lennox leads the team with a 3.01 goals against average (GAA) and a .884 save percentage (SV%).