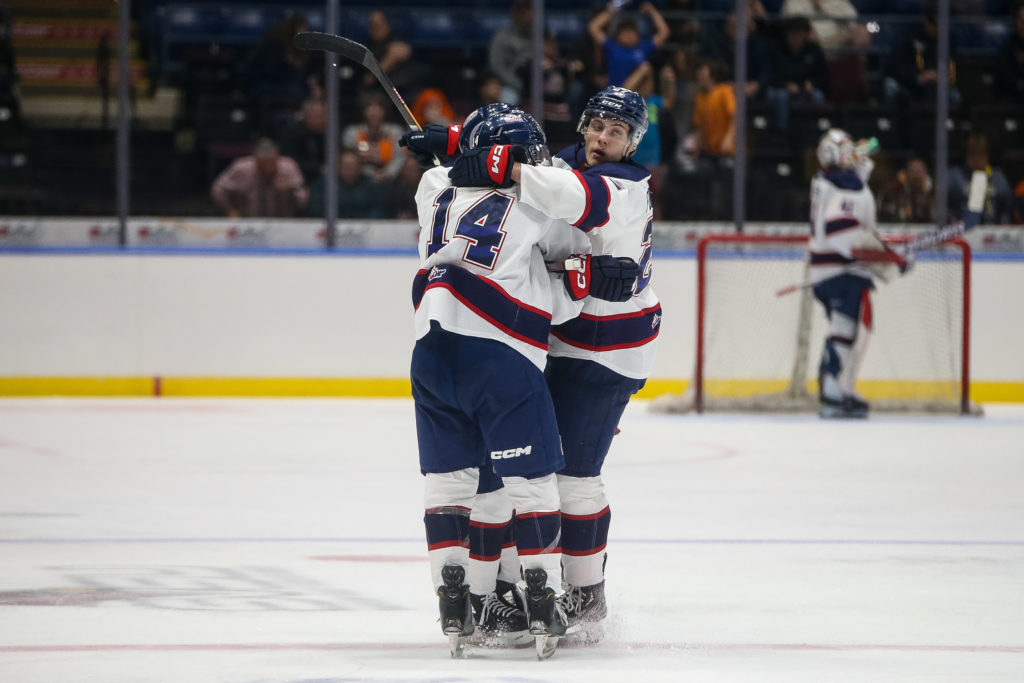 Saginaw, Mich. – The Saginaw Spirit played their in-state rival the Flint Firebirds at the Dow Event Center on Friday night and would come away with a 3-2 win with the help of two goals from 2022 first round pick Zayne Parekh.

The Firebirds got the only goal in the first at 6:31 courtesy of overage forward Sahil Panwar. The forward skated up the left side of the ice on a breakaway. Panwar was able to slice through Saginaw’s skaters and put the puck into the net on the left side of goalie Brett Fullerton.

The rest of the period was a defensive affair, with the Spirit leading the Firebirds in shots with 15 compared to 10 for Flint. The Spirit would finish the game with 37 shots and Flint would trail with 30.

Saginaw answered quickly in the 2nd period at 55 seconds with a power play goal from Joey Willis. The goal, which was Willis’ first of the preseason, came on a pass from Calem Mangone. Mangone skated the puck to the right side to set up a one timer pass. Michael Misa started the play by getting the puck to Mangone, earning his fifth assist of the preseason.

Saginaw would get a good opportunity to take the lead with five minutes to go in the second. PJ Forgione attempted a one timer from the right side of the blue line, but the shot was gloved by goalie Nathaniel Day.

Flint goalie Nathaniel Day would stay in net for the entire game, making 34 saves on 37 shots. Brett Fullerton got the start for Saginaw, making 28 saves on 30 shots.

The Spirit scored a few minutes later at 17:54 of the second. The goal was netted by Zayne Parekh, who waited patiently for the opportunity to score by skating across the center of the offensive zone and made his move to the left of the goalie. He was given the opportunity by Rochester Hills, Michigan native Liam Storch. Teammate Carson Christy skated the puck into the zone to start the play, earning his second assist of the preseason.

The Firebirds would tie the game at 2-2 in the third with a goal from Ethan Hay. Zachary Giroux won the faceoff, who quickly passed the puck to Tristan Bertucci. Hay would receive the puck next and score off a back handed shot at 3:50 of the third.

Saginaw regained the lead at 7:37 in the third. Zane Parekh scored from the left side of the offensive zone. This goal was Parekh’s second of the game, and was set up from the left corner by Joey Willis. A scrum for the puck started on the left side that saw Willis emerge victorious.

Despite a few empty net goal attempts, the Spirit would end the game on top with a final score of 3-2.

The Spirit will play their final preseason game Saturday, Sept. 23 at the Flint Iceland Arenas. Puck Drop is scheduled for 7:00 p.m.