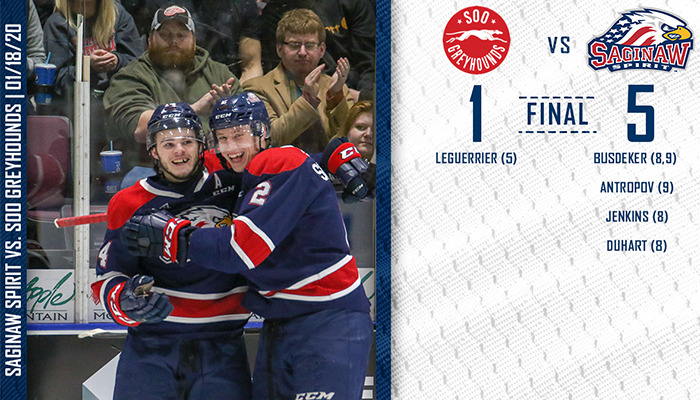 Just over a minute into the opening period, the Spirit surrendered a breakaway opportunity to the Soo Greyhounds leading scorer Zack Trott.  Trott attempted to deke Saginaw goaltender Marshall Frappier to open his pads and slide the puck through.  Frappier got just enough of the puck to deflect it over to the right post and keep the game scoreless early.

A little over five minutes into the first period, overage defenseman D.J. Busdeker took the puck away from a Soo forward in the Saginaw zone and flew up ice.  The Dexter, Michigan native Busdeker used his speed to go wide-left around a Soo defenseman and cut back towards the net.  Busdeker fired a wrist shot from in close but couldn’t get the puck over Soo netminder Nick Malik’s glove.

After Montreal Canadiens prospect Jacob LeGuerrier was called for a slashing minor, Busdeker capitalized for the Spirit on the power play.  Defenseman Ilya Solovyov dropped a pass off to New York Islanders draft choice Blade Jenkins at the left face-off circle.  The Jackson, Michigan native Jenkins sent a cross ice pass to Busdeker at the right circle, where the Saginaw defenseman sniped a wrist shot short side over Malik’s left shoulder for the 1-0 Spirit lead 12 minutes into the first frame.

Saginaw outshot the Soo 11-4 after 20 minutes of play and took the 1-0 lead into the first intermission.

Penalties to Saginaw’s Dalton Duhart and the Soo’s Joe Carroll for roughing carried over into the second period and the Greyhounds capitalized on the four-on-four opportunity just 17 seconds into the middle frame.  Trott sped around the back of the Saginaw net and sent a pass over to defenseman LeGuerrier, who fired a wrist shot from the right face-off dot passed the sliding Frappier to tie the game 1-1.

Just 1:59 after LeGuerrier’s goal the Spirit answered to take back the one-goal lead on forward Danil Antropov’s ninth goal of the season.  Rookie Roberto Mancini’s point shot rebounded into the Greyhounds slot and Antropov corralled the puck.  The Saginaw forward fired a quick turnaround wrist shot from just outside of the Soo crease top shelf past Malik to make it 2-1 Saginaw.

Just as a minor hooking penalty to the Greyhounds Rory Kerins expired, the Spirit extended their lead to two goals on a tick-tack-toe passing play.  Upon entry in the Soo zone, Danny Katic sent a cross ice saucer pass to Jack Goldowski.  Goldowski found Blade Jenkins cut toward the Soo net and fired a pass to the New York Islanders prospect for an easy tip into the open left-side of the Greyhounds goal for the 3-1 Saginaw Spirit lead.  With the assist, the Thornhurst, Pennsylvania native Goldowski extended his point streak to seven games.

Grand Blanc, Michigan native Dalton Duhart gave the Spirit a 4-1 lead on his 19th birthday.  Camaryn Baber sped into the Soo zone on a two-on-one rush and the Saginaw forward cut back at the left face-off circle and attempted a pass into the Greyhounds slot.  A Soo defender stopped the pass but Duhart was able to get his stick on the puck and slap it into the top right corner of the Soo Greyhounds net.

With Philadelphia Flyers prospect Mason Millman charged with a hooking penalty, Marshall Frappier needed to make a desperation save to keep the Spirit ahead three goals.  Rookie Tanner Dickenson controlled the puck in the Saginaw slot and slid a pass over to 2020 NHL Draft prospect Jaromir Pytlik to the left of the Spirit goal.  The Spirit netminder slid to his left on the ice and made a pad save on Pytlik who could not put the puck over Frappier’s pad.

With Tye Kartye penalized with a high-sticking minor with just under seven minutes left in regulation, Alex Johnston nearly cut into the Saginaw lead with a shorthanded chance.  Johnston won the puck battle in the Spirit zone with a Saginaw defenseman and fired a turnaround shot from point blank in the Saginaw slot.  Frappier stayed with the puck and denied the Johnston shot to keep the Spirit ahead, 4-1.

After a Camaryn Baber slashing penalty, D.J. Busdeker notched his second goal of the game with a shorthanded tally with 4:36 left in regulation.  Busdeker intercepted a Soo pass in the Saginaw zone and broke out with Minnesota Wild prospect Damien Giroux on a two-on-one rush.  When they entered the Soo zone, Giroux sent a saucer pass over the Greyhounds defenseman’s stick over to Busdeker.  The Spirit defenseman Busdeker roofed a shot just outside of the crease for the eventual 5-1 Saginaw victory.

Marshall Frappier made 21 saves on 22 Soo Greyhounds shots for his 14th win of the season.

The Saginaw Spirit finish off the three-in-three weekend with a matchup against the West Division rival Windsor Spitfires at the WFCU Centre in Windsor, Ontario Sunday, January 19.  Puck drop for the sixth of eight regular season meetings this season begins at 2:30 p.m.

Sunday’s contest kicks off a five-game road swing for the Saginaw Spirit with their next home game set for February 1 when the Spirit host the Midwest Division’s Erie Otters from the Wendler Arena inside The Dow Event Center.  Puck drop for the second meeting of the season starts at 7:05 p.m.

February 1 marks the return of the 13th annual Shocks and Saves Night presented by the Pulse 3 Foundation at The Dow Event Center.  Prior to the battle between the Spirit and Otters, the Detroit Red Wings alumni and local EMT’s and doctors take part in a game to raise funds in order for Great Lakes Bay public facilities to be equipped with Automatic External Defibulators or AED’s.  Puck drop for the 13th annual Shocks and Saves Charity game begins at 4:30 p.m.