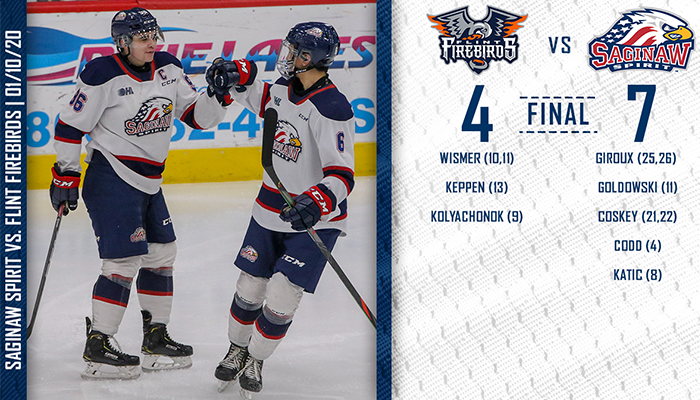 The Saginaw Spirit defeated the in-state rival Flint Firebirds 7-4 in the sixth installment of this season’s Coors Light I-75 Divide Rivalry on the road Friday evening.  The victory was Saginaw’s eighth straight victory over Flint at the Dort Federal Credit Union Event Center in Flint, Michigan.

Forward Danil Antropov nearly put the Spirit on top just over three minutes into the opening frame on a rebound chance just to the left of the crease.  Rookie defenseman Roberto Mancini kept the puck in the zone and skated across the Firebirds blueline to look for an opening.  Mancini fired a wrist shot from the center point that was fought off by Flint netminder Anthony Popovich.  The puck rebounded left to Antropov but Popovich was able to slide across to keep the game scoreless early.

Saginaw Spirit goaltender Tristan Lennox was tested on a point shot through a screen just over six minutes into play.  Firebirds defenseman Riley McCourt kept the puck in the Spirit zone and sent a wrist shot through several players that Lennox snagged with a glove save.

After Philadelphia Flyers prospect Mason Millman was called for a tripping minor, Minnesota Wild prospect Damien Giroux notched his team-leading 25th goal of the season while the Spirit was shorthanded.  The Saginaw Spirit captain intercepted a Firebirds pass and sped down the right-wing boards into the Flint zone.  Giroux cut across center around a Firebirds defender and roofed a wrist shot over Popovich’s right shoulder for his third shorthanded tally of the season with 5:49 left in the first period.

Saginaw forward Jake Goldowski made it a two-goal Spirit lead with 2:56 remaining in the first period on his 11th goal of the season.  Antropov forechecked the Flint defense and gained control of the puck in the right corner behind the Firebirds net.  Antropov centered the puck to Goldowski at the right face-off circle and the right-winger fired a quick wrist shot past Popovich to make it 2-0 Saginaw.

After Camaryn Baber was issued a slashing penalty, Flint Firebirds forward Jack Wismer cut into the Saginaw lead with his 10th goal of the season.  2018 Dallas Stars first round pick Ty Dellandrea centered a pass into the Spirit slot and Wismer jammed a bouncing puck past Lennox to put the Firebirds on the board with just 39 seconds left in the first period.

Each club fired 12 shots on goal in the first frame, but Saginaw took a 2-1 advantage into the second period.

Giroux added to the Saginaw lead 3:31 into the second period with his second goal of the game and 26th of the season.  Newly acquired Carolina Hurricanes signee Ryan Suzuki gained control of the puck in the Flint zone and led Giroux with a pass in the slot.  The Spirit captain sniped a wrist shot past Popovich’s glove for a 3-1 lead.  Suzuki was credited with an assist on the goal in his Saginaw Spirit debut.

Vancouver Canucks prospect Ethan Keppen cut the Saginaw lead down to a goal 4:17 into the second period with his 13th goal of the season.  Keppen used his speed and wrapped the puck around the Saginaw goal that just squeaked through Lennox and the post to make it a 3-2 game.

After Suzuki was called for a tripping minor, Wismer tied the game for the Firebirds on his second goal of the game 7:47 into the second frame.  Evgeniy Oksentyuk sent a cross ice pass through the Spirit slot to find Wismer at the backdoor for the easy one-timer tally to tie the game, 3-3.  With the assist, the Belarusian forward Oksentyuk set a Flint Firebirds record with a 15-game point streak.

New York Islanders draft pick Cole Coskey gave Saginaw the lead back just past the midway point of the second period on a two-on-one rush.  ‘A’ rated 2020 NHL Draft prospect Cole Perfetti drew the Firebirds defenseman and the goaltender Popovich to him and slid a pass for a wide-open tap-in to the right of the Flint net to make it 4-3 Saginaw.  The Whitby, Ontario native Perfetti extended his career-high point streak to 10 games with the assist.

With just 3:12 left in the second period, Coskey found the back of the net for the second time in the game.  Perfetti dumped a pass down to Suzuki in the Flint corner and the London, Ontario native fired a pass to Coskey at the top of the right circle.  The Saginaw right-winger fired a wrist shot that went through Popovich’s equipment for the 5-3 Spirit lead.

Shots were close through two periods with the slight Saginaw Spirit edge 25-24.

Rookie forward T-Bone Codd extended the Spirit lead to three goals on his fourth goal of the season 5:45 into the third period.  New York Islanders prospect Blade Jenkins sent a cross ice pass over to Codd at the right point and the Spirit rookie drifted toward the Flint net.  Codd was given room by the Flint defense and toe-dragged into the slot and sniped a wrist shot top-shelf for the goal.

After a knee-to-knee hit by Riley Piercey on Cole Coskey a fight broke out between Piercey and Ilya Solovyov. The ensuing four-on-four play led to the Firebirds cutting the Saginaw lead to two goals.  After a save on a one-timer by Oksentyuk on a two-on-one, Vladislav Kolyachonok hammered home the rebound to make it a 6-4 Saginaw lead with 4:20 left in regulation.

Forward Danny Katic added an empty-net goal with 2:23 left in regulation for the eventual 7-4 victory and their eighth straight win over the Firebirds at The Dort Federal Event Center. The last time the Spirit lost in regulation in Flint was Nov. 23, 2016.

The Saginaw Spirit host the London Knights Saturday, January 11 for the second annual Love Shouldn’t Hurt Night presented by The Bay Area Women’s Center and Underground Railroad, Inc. at The Dow Event Center in Saginaw, Michigan to support domestic violence victims in the Great Lakes Bay Region.  Puck drop for the third of four regular season meetings between the Spirit and Knights begins at 7:05 p.m.