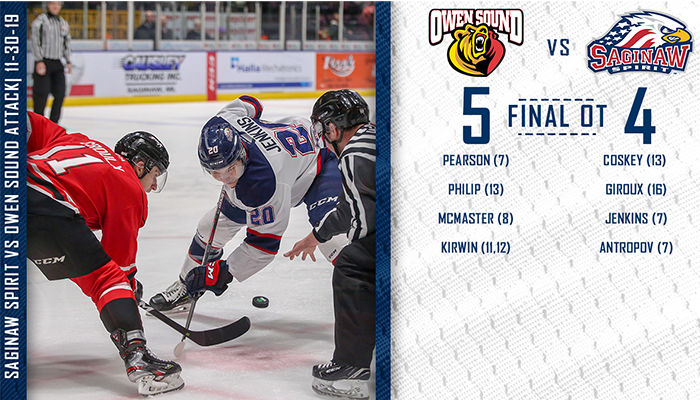 Newly acquired Danil Antropov scored his first goal as a Saginaw Spirit with just seven seconds left in regulation to send the game into overtime.

Owen Sound’s seven-game winless streak came to an end with the victory over Saginaw.

The Spirit started early with their quickest opening goals of the season just 40 seconds into the first period on New York Islanders prospect Cole Coskey’s 13th goal.  Belarusian defenseman Ilya Solovyov took a shot from the left point as Coskey supplied a screen in front of Owen Sound goaltender Mack Guzda.  The Zion, Illinois native Coskey stopped the Solovyov shot in front of the crease and backhanded a shot that beat Guzda for the early 1-0 lead.

Owen Sound evened the score 3:23 into the first period with right-winger Kaleb Pearson’s seventh goal of the season.  Sergey Popov pinched at the Spirit blue-line and rifled a slapshot off Saginaw netminder Marshall Frappier’s pad.  Pearson collected the rebound in front of the crease and deked to his left and slid the puck around Frappier’s pad to tie the game.

Captain Damien Giroux found the back of the net for the 16th time this season to regain the lead for the Saginaw Spirit.  New York Islanders prospect Blade Jenkins collected the puck to the left of the crease and skated around the back of the Attack net.  The Jackson, Michigan native Jenkins sent a pass to the Minnesota Wild prospect Giroux in the crease.  Giroux quickly flipped the puck over Guzda’s blocker for the goal 12:34 into the opening frame.

Saginaw was on the power play after forward Barret Kirwin was called for cross-checking, but a turnover in the Spirit zone created a shorthanded breakaway opportunity for Attack left-winger Matthew Philip.  Philip faked a shot and deked right for a backhand flip over Frappier’s pad for his 13th goal of the season.  The shorthanded goal tied the game 2-2 with 3:18 remaining in the first period.

Saginaw and Owen Sound each fired 14 shots on goal in the first frame for the 2-2 tie.

Owen Sound took the lead 4:37 into the second period on a redirection in front of the net by Adam McMaster.  German forward Joshua Samanski centered a pass for Daylon Groulx to one-time from the right face-off dot.  Groulx’s one-timer deflected off McMaster in front of the crease past Frappier for his eighth goal of the season.

Saginaw nearly tied the game just over nine minutes into the second period on a one-time opportunity from Ilya Solovyov.  Blade Jenkins patiently stick handled in the left corner and sent a pass to Solovyov as the Saginaw defenseman drifted down to the top of the right circle.  Solovyov’s one-timer was fought off by Guzda and the rebound was cleared before rookie Ethan Cardwell was able to get his stick on the puck.

It looked like Saginaw was able to tie the game with just over five minutes remaining in the second period after top 2020 NHL Draft prospect Cole Perfetti sniped a wrist shot from the slot top-shelf.  As Perfetti took the shot however, Philadelphia Flyers prospect Mason Millman was called for a slashing penalty which nullified the Saginaw goal.

Perfetti was robbed of a goal just minutes later on a three-on-two rush for the Spirit.  Newest Saginaw Spirit Danil Antropov sent a cross ice pass to the Whitby, Ontario native Perfetti in the left circle for a one-timer.  Owen Sound netminder Guzda was able to slide over just in time with his stick up in the air to deflect the puck over the net with the desperation save to keep the one-goal lead.

Saginaw trailed 3-2 after 40 minutes of play despite a 25-21 shot advantage through two periods.

The Attack extended their lead 9:53 into the third period on with a breakaway tally by forward Barret Kirwin.  The puck bounced around in the neutral zone past a couple Spirit defenders and Kirwin collected the puck in stride to fly past the defensemen.  Kirwin took a wrist shot from the top of the slot into the top-right corner of the net for his 11th of the season.

After Matthew Philip was called for tripping Saginaw’s ‘T-Bone’ Codd, Saginaw pulled Frappier for a six-on-four power play opportunity.  Blade Jenkins brought the Spirit to within one-goal on his seventh goal of the season and 50th of his OHL career.  Dexter, Michigan native D.J. Busdeker’s wrist shot from the point rebounded into the slot where Jenkins fought off an Attack defender to get a shot off.  The puck floated through traffic over Guzda’s shoulder to make it a 4-3 game with 2:45 left in regulation.

With the secondary assist, Cole Perfetti extended his point streak to eight games.

Saginaw’s net remained empty as time wound down when Danil Antropov tied the game with his first goal as a Saginaw Spirit in just his second game with the club.  Antropov fought for the puck to the right of the crease and sent a turnaround sharp angle shot that slid under Guzda’s pad to tie the game with just seven seconds left in the third period.  The North York, Ontario native has a goal and assist in two games as a Saginaw Spirit.

The comeback fell just short in overtime when Kirwin notched his second goal of the game just 58 seconds into the extra frame.  Overage defenseman Brady Lyle set up Kirwin for a two-on-one one-timer that was just out of Frappier’s reach to snap Owen Sound’s seven-game losing streak.

The Saginaw Spirit return home Wednesday, December 4 to host the Midwest Division leading Guelph Storm in a makeup game from the postponed November 2 contest due to poor ice conditions.  Puck drop from the Wendler Arena inside The Dow Event Center begins at 7:05 p.m.